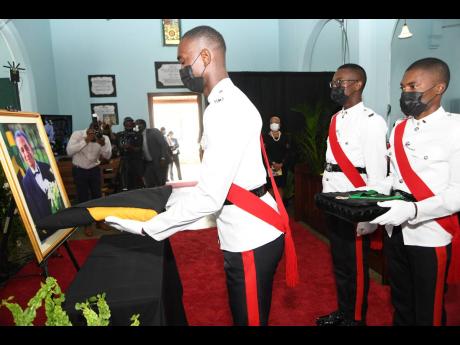 Rudolph Brown/Photographer
From left: Sgt Leonard Gordon, Sgt Hoshane Lennon and Tarik Pryce with the national flag and the Insignia of the Order of Jamaica, which was accorded to the late Ambassador Anthony Johnson, at his memorial service at Kingston College’s St Augustine Chapel on North Street in Kingston yesterday. 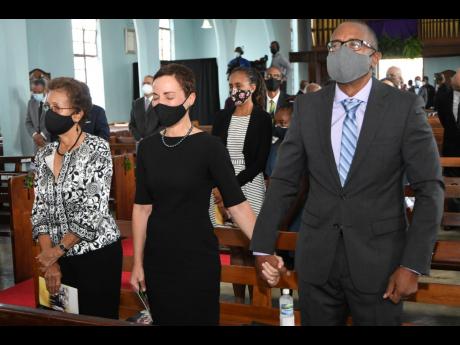 A lifelong learner who had an intense love for country, a rock-solid father and comedian.

That is how former Ambassador Anthony Johnson was remembered in a memorial service yesterday.

He was a former ambassador to the United States, a former Jamaica Labour Party (JLP) member of parliament (MP), senator, economist and lecturer.

He also served as high commissioner to the United Kingdom; non-resident ambassador to the Republic of Finland, the Kingdoms of Sweden, Norway and Denmark, as well as Ireland; and permanent representative to the Organization of American States.

His only son, Alexander, highlighted that his father had an unending fountain of knowledge and Jamaica’s concerns were ever present in discussions at their family home.

Alexander recalled that during Hurricane Gilbert in 1988, water poured through their living room roof and the home sustained considerable damage.

“Myself and Mom were scurrying around [with] mops and buckets, newspaper and the like, and Daddy was standing up ankle deep in water, with his hands on his hips and he’s kinda looking off in the distance and he said, ‘The farmers taking a beating. Not a banana tree is going to be left standing and we are just getting ready with papaya. This hurricane is gonna take everything for Jamaica to come back, but we’re gonna come back’,” he recalled.

He pointed out that though his father was committed to the affairs of Jamaica, as children they never felt an absence.

Daughter and foreign affairs minister, Kamina Johnson Smith, said her father believed that books were to be written and read by Jamaicans.

“He said books saved him. They were his refuge during a challenging childhood and they created his path for opportunities. He also often reminded us that we as a people don’t tell our stories enough, so we don’t embed enough national pride in our children from early on,” Johnson Smith recounted.

In a tearful tribute, Johnson’s youngest daughter, Olivia Wilmot, described her father as larger than life.

“Your laughter and song could not be contained by any room ... . There will never be a page or a book that could hold all there is to say and all that you mean to me,” Wilmot said.

Professing her love to her father, she thanked him for being an excellent man.

He would often greet his fellow party members with a wide smile, which turned into a grin and then a “rock-roaring” laugh.

Johnson rose through the ranks of the party to become a deputy leader, who was never afraid to challenge anyone.

“He would go to the end of the world and back to defend his principles and the people who he served,” Montague remarked.

Johnson was a reliable authority on the history of his alma mater, Kingston College (KC), and a “walking encyclopaedia of Fortis anecdotes”.

He became the go-to man on KC events on achievements from the 1950s, when he was a student, onwards and later authored a book detailing the school’s history.

Dr Patrick Dallas, who read the tribute on behalf of the old boys’ association, said Johnson will be dearly missed.

“The KC experience was truly enlightening and Tony Johnson, as he was affectionately known, relished it. He became the quintessential flag-bearer. While he wouldn’t lay claim to excelling on the playing fields of Clovelly [Park], he was a very ardent supporter and defender of everything Fortis,” Dallas stated.