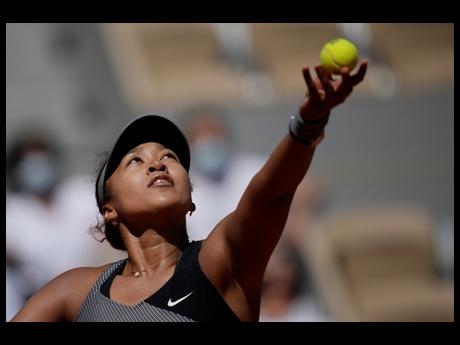 Japan's Naomi Osaka serves the ball to Romania's Patricia Maria Tig during their first round match of the French open tennis tournament at the Roland Garros stadium earlier today. Osaka, tennis' world number two seed, won the match 6-4 7-6 (7-4). However, she could face expulsion from the French Open if she continues to refuse to accommodate media interviews. The BBC reports that she has been declining interviews to "protect her mental health" (AP file photo).

The BBC is reporting that world number two, Naomi Osaka, could face expulsion from the French Open if she continues to refuse to speak to the media.

The 23 year-old, who represents Japan, had reportedly said last week that she will not do news conferences during the Grand Slam, because she wants to protect her mental health.

She has already been fined US$15,000 for failing to address the media following her first-round victory over Romania's Patricia Maria Tig earlier today.

Organisers have asked her to reconsider her position and said they have been unsuccessful in their attempts to check on her wellbeing.

After a "lack of engagement" from Osaka, the Grand Slam organisers wrote to her to offer support, as well as to "remind her of her obligations," the BBC said.