UK amber list restrictions not preventing travel to the Caribbean 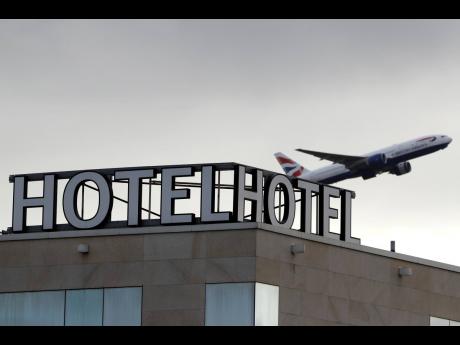 File
A plane takes off from Heathrow Airport in London, England, earlier this year.

After being cooped up in her London home for what seemed like an eternity, digital marketing consultant Ursula Barzey had been looking forward to a holiday in the Caribbean. Her first order of business on what would have been her first trip abroad...

After being cooped up in her London home for what seemed like an eternity, digital marketing consultant Ursula Barzey had been looking forward to a holiday in the Caribbean. Her first order of business on what would have been her first trip abroad in over 14 months would have been a visit to her 101-year-old grandmother in Montserrat before proceeding to enjoy some good Caribbean food and warm weather, she told The Sunday Gleaner.

All Barzey was waiting for before booking her flight was official confirmation from the United Kingdom transport secretary, Grant Shapps, that Caribbean countries would be on the green list in the so-called traffic light travel system that determines the level of restrictions placed on people returning from holidays abroad. Instead, she was left utterly disappointed, as not a single Caribbean country was given the green light when the announcement was made on Friday, May 7, forcing her to reconsider her travel plans.

“It’s made me quite hesitant because initially, I was looking at flights, figuring out, can I get insurance? Now I’m like, I need to just wait until the government updates the list in a couple of weeks,” explained the travel content creator. “So yeah, it’s made me very hesitant to book anything.”

Like Barzey, Paul Cleary was eagerly awaiting Shapps’ announcement, salivating over the prospects of a return to travel to the Caribbean. In the weeks leading up to the revelation of the lists, there had been strong hints that the Caribbean would have been in the clear. Therefore, Cleary, the managing director of the UK holiday company Caribtours, which specialises in luxury holidays to the Caribbean, had his new advertising campaign set and ready to go immediately following the announcement.

“Everything that was reported in the UK press in the three weeks prior to that announcement very clearly led us to believe that the Caribbean would be a clear winner,” he told The Sunday Gleaner. “So, yes, we were expecting the Caribbean [to be on the green list], we were geared up for the Caribbean. ... And it was the most lacklustre press conference [by Shapps] in all ways – the delivery, the content. It was lacklustre, disappointing, and it gave us nothing.”

Complicating the matter for millions of would-be holidaymakers such as Barzey and Angelina (last name not given), who was planning to fly to Jamaica on May 17, is what the UK’s opposition Labour Party has described as the “dangerous chaos” over what the new traffic light rules mean.

Under the ‘stay at home’ rule, it had been illegal since January for Brits to go on holiday abroad, with anyone travelling without good reason facing a £5,000 fine. However, the fines were dropped when the legal ban was lifted on Monday, May 17 and replaced with the traffic light system, which assigns a colour of red, amber or green to countries.

Travellers returning to England from countries on the green list will not have to quarantine, although they must pay for pre-departure and post-arrival COVID-19 tests.

Amber arrivals will need to quarantine at home for 10 days and take a pre-departure test, then a PCR test on the second and eighth day after arrival.

People returning from the red list destinations, from which direct flights are banned, will face stricter restrictions, including a 10-day stay in a managed quarantine hotel at a cost of £1,750, pre-departure testing and PCR testing on the second and eighth day after arrival.

Any non-Britons who have been in a red list country within 10 days of arrival in England will simply be denied entry into the country. Those who try to cover up their arrival from a red list country also face jail sentences of up to 10 years.

However, there appears to be contradictory guidance from the British government on travel to 170 or so countries on the amber list, including virtually every Caribbean destination, with the exception of Guyana, Suriname and Venezuela, which are on the red list.

On Tuesday, May 18, the day after it became legal to travel again, the environment secretary, George Eustice, said that people could travel to amber list countries to see family and friends. Shortly afterwards, the prime minister, Boris Johnson, said travel to these countries should only happen for urgent family or business reasons.

Then on Tuesday night, the health minister, Lord Bethell, said in the House of Lords people should not travel at all, even to green list countries.

“We do ask people, particularly as we go into the summer, travelling is not for this year. Please stay in this country,” he said.

Despite Johnson’s insistence that the guidance on travel to amber list countries was “very, very clear”, opposition parliamentarians and the travel industry have said the mixed messages are confusing.

“I think the government has deliberately tried to muddy the waters in terms of spreading and sprinkling enough doubt in to make people think it’s still illegal. It just isn’t,” argued Cleary. “And no one should listen to [them].”

There are signs that millions of people are indeed ignoring the government and booking holidays to the amber list countries, including Jamaica and other Caribbean destinations.

Travel companies that specialise in visits to the Caribbean, and with whom The Sunday Gleaner spoke, reported similar interest from potential travellers.

“We’ve got thousands of bookings – people that are maintaining their bookings or have amended their bookings to countries in the Caribbean. We have people that are travelling within the next couple of weeks that are very much saying they will still travel,” Colin Pegler, managing director of Resort Marketing International (RMI), one of Europe’s leading hotel and destination representation companies, told The Sunday Gleaner.

“Despite Jamaica being omitted from the green list, we have received a positive response from our customers, many of whom are determined to travel home to their island of origin,” added Laverne Walker, director of the London-based travel agency, Sackville Travel Services Ltd, which sends an average of 20,000 to 25,000 visitors to the Caribbean each year, 70 per cent of whom travel to Jamaica.

“Our passengers are fed up with the constraints which have confined them to a limited space in the UK, depriving them of their much-needed natural vitamin D, fresh foods and the warmth of their family,” Walker stressed, adding that her clients were driven and determined to return home, because they preferred “to be in lockdown in Jamaica where they have more freedom, than to be confined to a small space in the UK”.

The additional cost associated with the many tests to be done by people travelling to amber list countries is of major concern, particularly for families. It’s an issue which was raised by Barzey and Angelina, the London woman who had planned a visit to Jamaica two weeks ago.

“I have to be inconvenienced with quarantine and paying for expensive COVID tests on my return to the UK, in addition to the fit-to-fly test before departing Jamaica,” Angelina told The Sunday Gleaner. “Extremely disappointing and illogical.”

For Cleary, the Caribtours boss, the additional cost, while “far from ideal”, is not a deterrent for the high-end holidaymakers who book with him. Cleary told The Sunday Gle aner that while he’d anticipated that no more than half of the people who had already booked would stick to their travel plans, he was pleasantly surprised to discover that up to 70 per cent intended to proceed with their holiday in the Caribbean.

“The cost I’m not so worried about for my customers, but there will certainly be hotels that are hit by that – the more budget-positioned hotels; but also it kills off the family market as well.”

“It’s a massive kick in the teeth for the people of the Caribbean who have done everything right – they’ve followed the guidance, they’ve vaccinated the hospitality workers, the transport drivers, the airport workers, we’ve got minimal COVID on the islands, certainly some of the key islands, and yet the UK government failed to recognise that and didn’t put them on the green list,” argued Pegler, the RMI head. “They have produced a list that bears no relevance to science or medicine. They picked destinations that most people have never even heard of … . It’s just absolutely nonsensical.”

The UK government has said it will review the lists round the end of the first week of June, by which time, many in the travel industry anticipate the Caribbean will be moved to the green list.

It’s a delicious prospect for Ursula Barzey, the content creator, who simply can’t wait for any bit of encouraging news about travel to the region.

“If they’re placed on the green list then, yeah, it’s all systems go,” she exclaimed. “It’s like, let’s book some flights.”