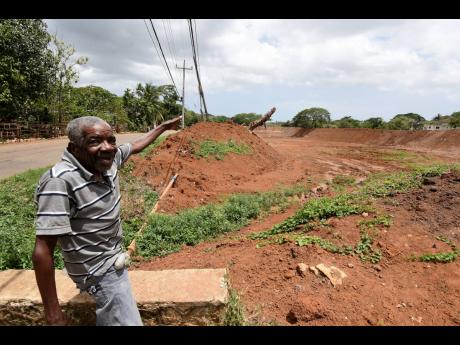 Ian Allen/Photographer
Eric Thomas, 66, is hopeful that the excavation of Big Pond in Bannister will ameliorate the flooding that haunts the St Catherine community. The hurricane season commences on Tuesday. 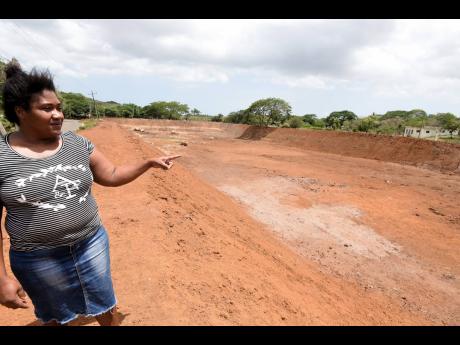 Ian Allen/Photographer
Christine Cox points to the catchment that is being excavated to relieve flooding in Bannister, St Catherine. Her home was flooded last year.
1
2

And few have suffered more than Christine Cox.

She is still haunted by the nightmare of murky water that flooded her premises that is situated directly across from a crater that householders call ‘Big Pond’.

Cox and other residents are hopeful that the excavation work being undertaken by the National Works Agency (NWA) will bring welcome relief.

The $20-million project is geared at cleaning and heightening the embankment, said manager of communications and customer services, Stephen Shaw.

“My God! I really do hope this (the excavation) work, as even last year, mi feel the wrath of Big Pond. My house flooded out, furniture damaged. We could only get out and walk to the hill,” Cox told The Gleaner.

Eric Thomas is also optimistic that the remedial work in Bannister, located north of Old Harbour, will offer reprieve to residents of the community.

Forecasters from the National Oceanic and Atmospheric Administration in the United States predicted up to 20 named storms for the Atlantic hurricane season, which runs from June 1 to November 30.

But that number is fewer than the 30 named storms that formed in 2020. Fourteen of those were categorised as hurricanes.

Jamaica suffered more than $8 billion in damage to its roads and farms in October and November last year, with the storms Eta and Zeta pummelling eastern swathes of the island.

Flood memories remain at the forefront of the minds of persons like Paulette McCalla, 63, who resides in Bartons district but who has visited Bannister daily for the last two decades.

She takes care of a householder.

And Kadesisha Thompson, a student of Portmore Community College, is also apprehensive as the new hurricane season looms.

“I just cannot take any more flooding. I hope it won’t happen again as it even affects my schoolwork,” Thompson said.

Whenever the Big Pond floods the Bannister main road, other communities are adversely affected, among them Bartons, Bamboo Ridge, Red Ground, and Old Harbour Glades.

Shaw is aware of the flooding crisis that has plagued Bannister but cautions that the current excavation will not fully solve the problem.

The Big Pond in Bannister caused great discomfort to users of the road and residents alike. The problem exists sometimes for days. Therefore, we are just trying to make things a little better,” the NWA communications manager said.