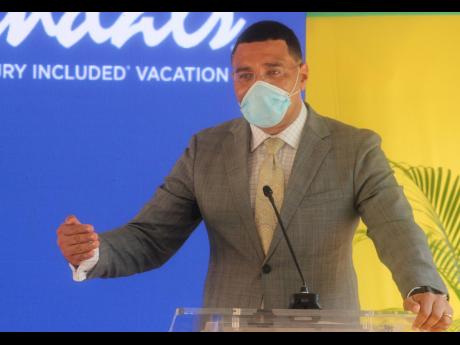 On the heels of investing $600 million into Montego Bay’s Harmony Beach Park, the Tourism Enhancement Fund (TEF) will be called upon to play an even greater role in the provision of parks throughout the country.

This is the second time in five days that Prime Minister Andrew Holness has highlighted the fund which was created to advance major projects identified under the Tourism Master Plan for Sustainable Development.

Ventures such as the Negril Lighthouse, Spanish Town, Port Royal and downtown Kingston were among the developments identified in the original plan.

Speaking at the groundbreaking ceremony for Sandals Dunn’s River and Sandals Royal Dunn’s River in Ocho Rios, St Ann last Wednesday, Holness noted that the TEF is money coming directly from tourism, and, aside from the direct linkages, social benefit is secured through the fund.

The fund does quite a number of maintenance and beautification projects in the tourist towns, for visitors and locals living in those areas, but the prime minister stated there are other areas in Jamaica that he would be expecting the participation of TEF in the building out of those parks.

Convinced this will be a very good symbol for the people of Jamaica to understand that they are benefiting directly from the industry, Holness argued that, from the jobs, the consumption of their services, or the provision of food and agricultural supplies, roadways and verges, training of staff and the provision of transportation, Jamaica was benefiting from the sector.

Obviously concerned that there was the sense the country was not getting the full value for tourism because most of the industry was exclusive, and that there may be some justification for that belief, Holness warned this should not in any way follow the embrace and support of tourism.

“Tourism is now one of our leading foreign exchange earners, and we must be practical about the product and support it, because it is the fastest product that we can grow at this time,” he argued.

This suggestion has been concretised by the presence of minister without portfolio in the Ministry of Economic Growth and Job Creation, Senator Aubyn Hill, at the just-concluded FITUR trade show in Spain.

Several of Jamaica’s largest investors are Spanish-based, and Hill and Minister of Tourism Edmund Bartlett met with some of the key players while there.

Lauding owners and investors for taking a risk on Jamaica’s tourism industry, Holness said they were bringing new rooms, new ships, and building new attractions, which for him was the definition of growth.

He commended the Sandals team for their latest investment, even while encouraging others to do likewise, as his Government stands ready to support any investment.

The island’s small hoteliers were not left out. Acknowledging their concerns over the years, regarding their survival, the prime minister said they have been looking very closely at how we can support them and one of the first things they did was while crafting the Resilient Corridor, it was about giving the small players an opportunity to operate during the pandemic.