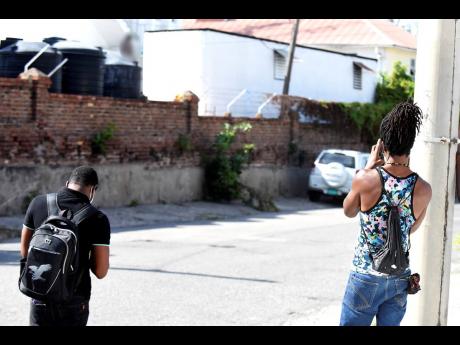 Kenyon Hemans/Photographer
A man takes photos of a man found hanging at the Elletson Road headquarters of the police Traffic Division in Kingston on Monday. The deceased has been identified as 37-year-old Devon Smith. 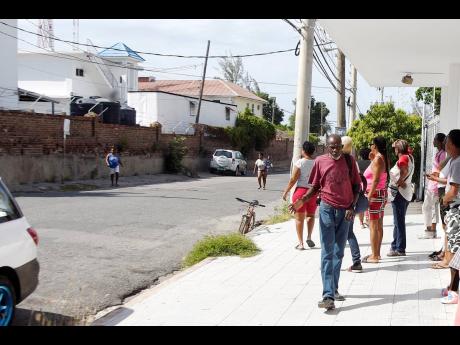 Kenyon Hemans/Photographer
Bypassers look at a hanging corpse at the Elletson Road headquarters of the police Traffic Division in Kingston on Monday. The deceased has been identified as 37-year-old Devon Smith.
1
2

A Kingston family now has two loved ones to bury after an ex-convict is suspected of hanging himself at the police traffic headquarters less than three days after being released from prison.

The body of 37-year-old Devon Smith was cut from a cable by firefighters at 10:15 a.m. after he was found hanging from the staircase railing of an administrative building of the Elletson Road Traffic and Highway Division headquarters around 4 a.m. on Monday.

Smith’s elder sister, who asked not to be named, told The Gleaner that he was released from the Tower Street Adult Correctional Centre having spent more than a year there for assault.

He reportedly suffered from a mental illness.

The Smith family lost a sister, Tracy Ann Senior, otherwise called ‘Mulla’, on April 29 in a gang attack on mourners near Meadowest Memorial Gardens in St Catherine. Two women died from gunshot wounds and several others, including an infant, were injured.

Smith’s sister believes that he might have been fearful of reprisal for the assault that landed him in prison or depressed over Senior’s death. Her body is slated for post-mortem on Monday.

“Him call mi up to Wednesday or Thursday and a ask when ‘Mulla’ a bury and mi tell him, ‘Gweh nuh! Yah come fi guh funeral?’ But him really come fi go funeral, cause a dat (suicide) him come do,” the sister said, referencing his troubles with the law.

The victim of Smith’s assault reportedly resides in east Kingston.

Smith, who was living with family at Wellington Street, allegedly hinted to a relative that he was going to “do something”.

The family said they were planning to take Smith to the doctor on Monday and had gone to the police station where he regularly hung out.

Fifty-eight suicides were reported in the 2019 edition of the Economic and Social Survey, two fewer than for the previous year.

The majority of victims were male (87.9 per cent), and hanging was the most common method used (75.9 per cent). There were two victims below the age of 15 years, eight between 15 and 24 years (youth) and eight over 65 years (elderly).

The parishes of Manchester and Clarendon recorded the highest number of cases, with nine and seven, respectively.

The Economic and Social Survey showed that 260 attempted suicide patients were seen in accident and emergency units of public hospitals in 2019.