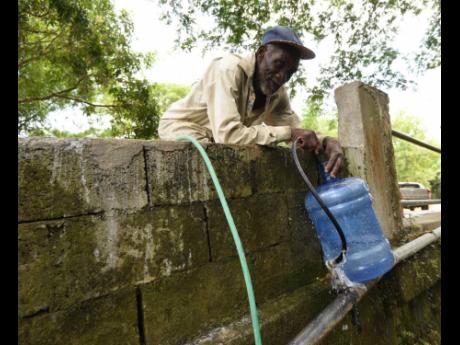 Ian Allen/Photographer
Anthony Roberts catches water from a pipeline in Danvers Pen, St Thomas. The community is one of many in the parish that are prone to flooding. 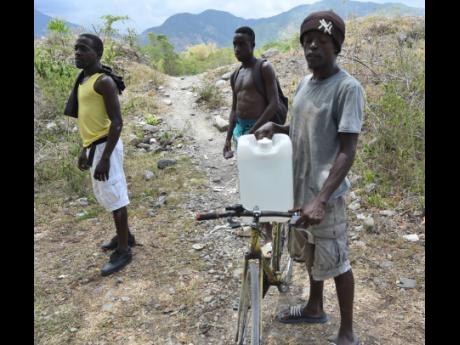 Ian Allen/Photographer
From left: Tevin Graham, Steve Samson and Christopher Williams, residents of Danvers Pen in St Thomas who are concerned that their community could be flooded this hurricane season.
1
2

Countless calls for the Negro River in St Thomas to be properly trained have seemingly fallen on deaf ears.

The river flows through several communities, posing grave threat, especially to residents of Old Road and Danvers Pen, when it is in spate.

Claiming that the river has been untrained for more than 20 years, Christopher Williams, a farmer, is fearful of the unknown in the 2021 Atlantic hurricane season, which began on June 1.

Thirteen to 20 named storms have been forecast for the six-month period.

“The last time, water run through the district and through people house and we nuh get no benefits,” said Williams, who said he recalled groyne works being undertaken about the year 2000.

Williams estimates that two miles of groyne need to be repaired and he is appealing to the authorities to intervene “because it stay bad”.

“We need the river fi set back because storm season on now and we going to get the water like last October and November, and when that water run through the district, a bawling, man ... . We a beg fi better,” he said.

The October-November catastrophe Williams referenced were the 2020 rains that battered eastern Jamaica, with St Thomas and sections of the St Andrew East Rural constituency ravaged by landslides and flooding.

Tevin Graham is no stranger to inundation in Danvers Pen. His homes was one of many that were breached during heavy rains last year.

He is seriously considering moving to another community this hurricane season because of storm fatigue.

“Every time the water come, it flood we out, and we can’t stay in our house. We have to put our beds on high blocks,” Graham told The Gleaner.

Communications manager of the National Works Agency, Stephen Shaw, said that there were no scheduled works for the Negro River at this time.

Residents believe that although the riverbanks have been badly eroded over the last few years, it’s not beyond saving.

Steve Samson is optimistic of a salvage despite the erosion of the groynes upriver.

“If them mine the river and dig down the bed little more, then maybe mi friend house won’t wash out next time,” Samson said.