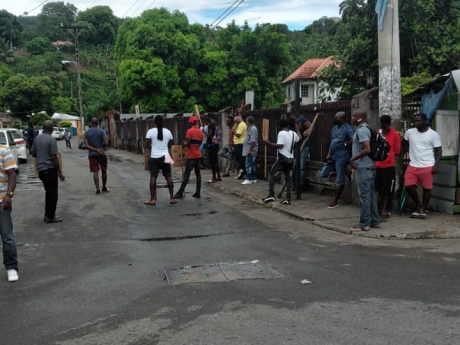 Upset taxi operators staging a protest in the town centre in Hope Bay, Portland on June 2, 2021, to press their demand for a fare increase. The demonstration left commuters stranded for several hours - Gareth Davis Snr photo.

Scores of commuters were left stranded in Hope Bay, Portland this morning after taxi operators withdrew their services as they called for a fare increase from the Government.

The more than 30 taxi operators took to the streets from as early as 7 o'clock in a peaceful protest in the town centre, leaving commuters stranded for more than four hours.

A spokesperson for the group, Michael Grant, told The Gleaner that the increase in gas prices has created undue hardships on operators and that they are finding it extremely difficult to cope with the existing taxi fare.

"We have not had a fare increase in more than four years. Yet still gas prices continue to increase almost every other day," Grant argued.

"A majority of us do not own a vehicle and therefore we have to work to pay ourselves. It is really tough and wi cah even carry nuh full load again. Our bosses expect to still collect the $20,000 per week from us and we still have to feed our families," he further argued.

According to the taxi operators, their plight is further compounded by COVID-19 restrictions, such as the rule to carry one less passenger, and the curfew order, which they say has significantly affected their earnings, especially on weekends.

The operators have vowed to continue their protest to get a fare increase.