Courts to get $20 million ICT boost 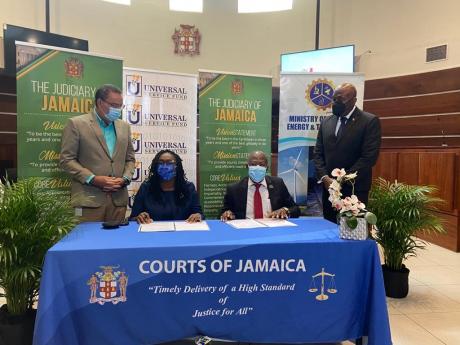 From left: Technology Minister, Daryl Vaz, Director of Court Administration at the Court Administration Division, Tricia Cameron-Anglin, CEO of the Universal Service Fund, Daniel Dawes, and Chief Justice Bryan Sykes. The USF today made a donation of $20 million to the division - Contributed photo.

The information and communication technology (ICT) infrastructure of Jamaica's courts is to get a boost following the donation of $20 million to the Court Administration Division (CAD) by the Universal Service Fund (USF).

The cheque was handed over at a contract signing ceremony held at the Supreme Court in Kingston today.

The CAD's director Tricia Cameron-Anglin and chief executive officer of the USF Daniel Dawes signed the contract on behalf of both entities.

The funds will be disbursed between July and October 2021.

“The donation will provide much-needed ICT equipment to boost the technological capacity of the courts to respond to the needs of the digital era. The courts have been conducting hearings remotely and we hope to expand the use of this technology by installing the requisite equipment in more courtrooms,” said Cameron-Anglin in a media release.

For his part, Dawes said the project forms part of the USF's overall investment in Jamaica's ICT infrastructure, which will this year total approximately $1.9 billion.

“Projects include the expansion of the national broadband network at a cost of $440 million, supporting the Government's 100-day broadband programme in the amount of $500 million, and establishing Wi-Fi hotspots in residential communities to the tune of $320 million,” Dawes said.

He added that support of the division's ICT improvement is just one more step in the country's thrust towards becoming a knowledge-based society.