Holness urges developers not to be thwarted by ‘bad mind’ 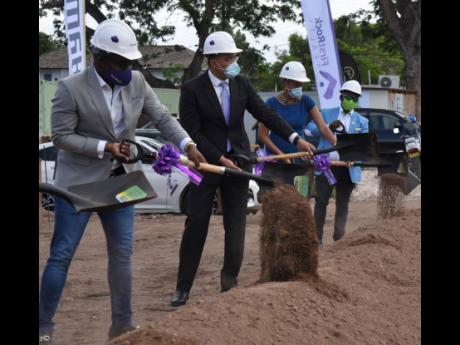 Prime Minister Andrew Holness has said that he has a lot of confidence in the young generation of local entrepreneurs, investors, and builders that they are going to change the face of Jamaica for the better, urging them to ignore the “bad mind element” in the country.

“Forget the talk, forget the bad-mind element in Jamaica. When you start to invest, people do all sort of things to trip you up, say all kind of negative things about you. Forget that and just persevere. Keep doing more and more,” Holness said during an address at First Rock Capital Holdings’ Hambani ground-breaking ceremony held on Saturday at the Bamboo Avenue site in Liguanea, St Andrew.

Holness also called on all Jamaicans to support local business people, who he believes are the most in the Caribbean.

First Rock CEO Ryan Reid said close to 200 jobs would be generated from the development, which is a sign that the company was betting on Jamaica.

“First Rock has as its mandate the business of real estate, which includes real estate development. We have a lot of confidence in the Jamaican economy, and that’s squarely represented in our asset-allocation strategy. Roughly about 60 per cent of our total assets are here in Jamaica. We said it when we formed this company from day one that we will always bet on Jamaica,” Reid said.

Holness said that his attendance at the ceremony was in line with the Government’s aim of seeking to return the country to normalcy.

The Jamaican economy is expected to grow by between 7.0 per cent and 9.0 per cent for the April-June 2021 quarter, the Planning Institute of Jamaica (PIOJ) has projected.

PIOJ Director General Dr Wayne Henry said there were consecutive quarters of growth in the construction industry even as other industries have been affected negatively in the context of the pandemic.

Construction suffered declines during the previous recession in 2008 and 2009, which was spawned by the US financial fallout.

“During the 2008 recession, construction was down. Only tourism was up,” Henry said.

Hambani, the luxury-type development, will be the first of its kind in Kingston, and Holness stressed that an asset (land) that sat idle for years would be fully utilised and bring economic value to Jamaica.

“That is how we get growth, when assets that are not utilised are paired with entrepreneurs, people who have vision to see what the unutilised asset could be, and people who have capital, resources tied up in savings, who are willing to take it and invest,” Holness said.