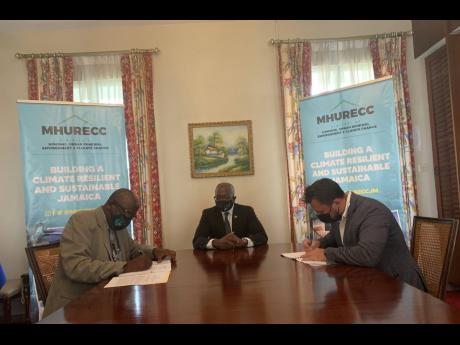 MORE THAN 5,000 upper Clarendon farmers are to benefit from the establishment of five farmer field schools designed to build their skills in climate-smart agriculture and sustainable land conservation, among other areas.

One hundred farmers will undergo training as trainers and then will be able to reach another 5,000 of their colleagues. Work on the schools is expected to start this month, following last month’s contract signing by the Ministry of Housing, Urban Renewal, Environment and Climate Change and Isratech.

“The overarching aim is to empower the farmers by providing them with the necessary knowledge and skills which will build resilience to the impacts of climate-related hazards. The farmers will be trained to disseminate their knowledge to other farmers in the communities [which is] aimed at improving farming practices,” said portfolio minister, Pearnel Charles Jr, at the contract signing.

The Farmer Field school activity will be implemented over the next seven months and is being implemented under the activities of the Adaptation Programme and Financing Mechanism for the Pilot Programme for Climate Resilience.

The programme was developed by the Government of Jamaica and the Inter-American Development Bank, as part of the country’s Strategic Programme for Climate Resilience with the overall goal of increasing Jamaica’s resilience to climate change.

Charles emphasised that the project is critical to the Upper Minho Watershed area, which has been categorised as severely degraded by the National Environment and Planning Agency.

This categorisation, he indicated, has resulted from unsustainable farming and land use practices, as well as the exploitation of minerals, which have had a deleterious impact on the environment in the area.