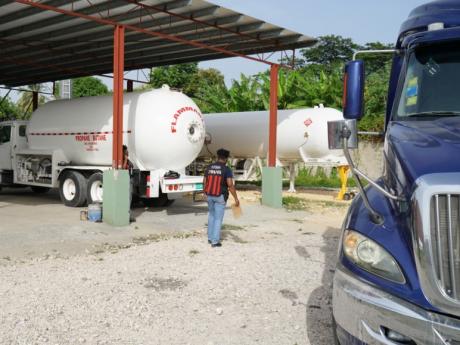 Detectives swooped down on an area near Christian Gardens, St. Catherine on Friday. Two gas tank trucks along with a fully retrofitted space for refilling cooking gas cylinders were discovered.

Detectives swooped down on an area near Christian Gardens, St. Catherine on Friday.

The two trucks and several gas cylinders were seized and the operation shut down.

Head of CTOC's Intellectual Property Unit Assistant Superintendent Victor Barrett said the operation was quite sophisticated but said preliminary checks indicated that no permits had been obtained for the operation.

He explained that cooking gas refilling operations must be licensed by the National Environmental Planning Agency once the capacity of the facility exceeds 18,000 litres.

One of the trucks seized holds approximately 50,000 litres.

Barrett said additional permits from the relevant municipal authority and the fire department are also needed.

Barrett explained that established companies must give permission for their cooking gas cylinders to be distributed or refilled by another company.

He said the police will be deepening their investigation as they seek to uncover the source of the gas being distributed and any other breaches that may have occurred.