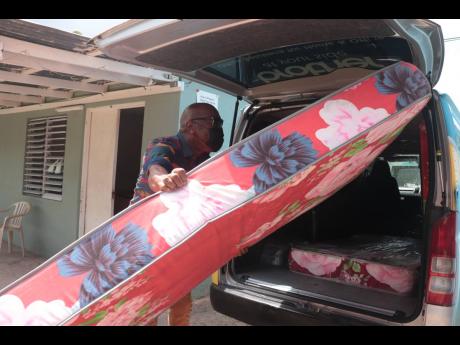 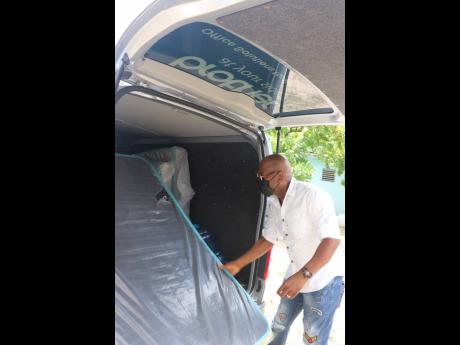 Contributed
Reggae singer George Nooks helps to unload the mattresses he donated to the golden-age home in Kingston.
1
2

At least 18 residents of The Golden Age Home in Kingston will now enjoy sweeter dreams, thanks to the donation of several brand new mattresses from reggae singer George Nooks. Cluster supervisor at The Golden Age Home, Morelene Moncrieffe, told The Gleaner that she is overjoyed.

“He (Nooks) has adopted clusters C and D. We needed mattresses, and Mr Nooks said he would get 18 for the clusters he is responsible for. But, to tell the truth, the mattresses went all over the compound, to fill in where the needs were greatest, and he didn’t mind at all,” Moncrieffe shared.

The supervisor highlighted that there is a need for mattresses and adult disposable underwear for the residents at the government-run facility, which houses approximately 450 golden-agers. Some of the residents, she said, have family members, but visiting has been restricted due to the pandemic. Moncrieffe, however, had words of commendation for service clubs, church groups and the singer, who continue to make meaningful contributions.

“For the past five years, Mr Nooks has been giving generously. He is a great help, and I must say that COVID don’t stop him at all. When he can’t come, he sends it down. He couldn’t be here with us last Christmas for the treat he puts on every year, because visitors were banned. But Mr Nooks got the catering team to bring meals, and he sent other treats. I recall the first time he came here, and there was a visually impaired resident, one of the younger ones, and she held on to him and said, ‘Papa, a long time mi wan’ see yuh.’ And he looked at her and shook his head and said something about not letting down his grandmother,” Moncrieffe shared.

Nooks and his wife, Heather, have committed to playing their role in making life a bit more comfortable for clusters C and D residents at the infirmary, and with the lockdown, things have not been quite the same.

“We used to go on Mother’s Day and Christmas and spend time, put on a little concert and have a nice little treat, but the most we can do is send some meals, so I was wondering what else could I do. And I thought about giving them some mattresses to at least put a smile on their faces before they go to sleep. And I run it by Miss Moncrieffe, and she was delighted,” Nooks said.

“I wish I could do more,” he said earnestly. “Everybody suppose to know by now that my grandmother who raised me was my hero and the love I have for her was, and still is, very special. So, all that I am doing for the folk at The Golden Age Home is being done in her honour and memory,” he said.

Not fascinated by labels such as philanthropist and humanitarian, Nooks is simply doing what he says is his “God-given duty”.

“ It is our responsibility as a society to care for the elderly. They have already given to us, and many of them are here largely because of circumstances. We may be fit and healthy and on top of the world today, but we don’t know what tomorrow holds. So let us do all the good we can, in all the ways we can, just as long as we can,” the Stand By Me singer urged.