Andrew Nelson powering on through his challenges 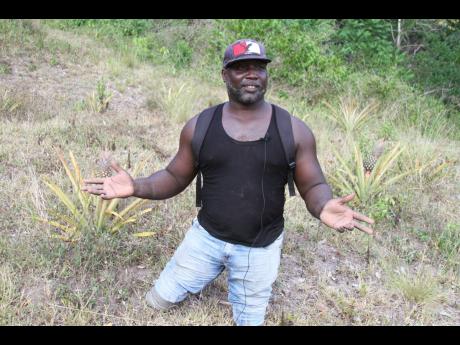 Nathaniel Stewart
Andrew Nelson of Simon in Clarendon, is rising above his challenges and pursuing pineapple farming as a means of earning a living.

One year ago, The Gleaner shared Andrew Nelson’s story. Born with no legs, the now 43-year-old has never allowed that to stop him from going about the business of life. From climbing trees to earning a living as a landscaper, furniture maker and farmer, he moves about with great energy and agility.

In last year’s feature, Nelson bemoaned the lack of a proper water system in his Simon, Clarendon community, which he said caused him to suffer loss in his farming endeavours as a result of the inability to adequately water the parched land.

In an update with The Gleaner, Nelson said that, since the article was published, he has received “a little help”, but he is still battling the water challenge.

“Since the last visit, a still have a challenge to deal with. The water challenge no better, but mi giving thanks mi get a little bit of help from the Rural Agricultural Development Authority (RADA) and some different association of people. I am thankful for it, very thankful for it,” he said.

Nelson, who has switched gears and is now focusing almost exclusively on farming pineapple, said he still can’t reap the yields he wants as the water situation prevents the fruits from thriving.

Even with the tank he received from RADA and some drip hoses to go through the pineapple field, he said the poor water source leaves it ineffective and he is still depending heavily on rainfall.

Nelson’s furniture-making business is now non-existent, as he said “nothing is going on in that department”, leaving farming as his main source of earning a living.

When the team visited Nelson, he was just returning from a day of labour where he volunteered his services in helping to build a room for another Simon resident, Kenneth Francis, who is living in less than ideal conditions in a house that is falling apart.

The Gleaner highlighted his story a few weeks ago.

Nelson said he felt compelled to volunteer as he can’t enjoy lying down in his bed knowing that someone else is not enjoying the same comfort.

Although Nelson has been farming since the age of five, he said pineapple farming is completely new to him. However, before he started, he got tips from other farmers who were already engaged in it.

He said he chose to farm pineapple, as opposed to other crops, because he felt he would have a better chance with it, plus he had “tested the soil”.

Still, he expressed some disappointment at the yield because they don’t grow as big as he thought they would.

“Dem say food is the staff of life, but for Simon to get water is the most important ting. If we get water, you will see more farming, because we know that, if you don’t have food, you won’t have life,” he said.