Commodore in Portland to get additional water shop 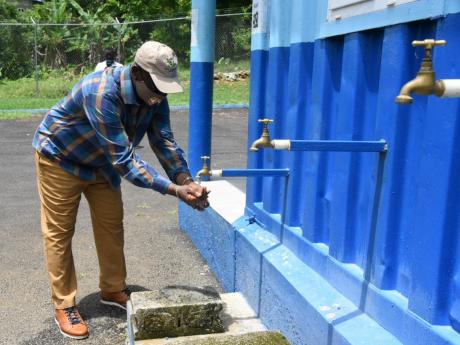 Minister of Local Government and Rural Development Desmond McKenzie uses the tap at the water shop in Commodore, Portland during a tour of the Portland community on June 11, 2021 – Contributed photo.

Minister of Local Government Desmond McKenzie says that an additional water shop will be built in Commodore, Portland to better meet the needs of residents.

McKenzie said that the new facility, which will be built shortly, will bring to two, the number of water shops serving Commodore.

“The area is badly affected by lack of consistent water. We constructed a water shop on the other side of the community, and I hear your cries. We understand the challenges that you are experiencing and we have agreed to construct a second water shop,” he said, adding that the facility will “provide you with some consistency”.

He was speaking during a visit to the community on Friday, June 11.

The water shop concept involves the construction of facilities islandwide to dramatically improve the availability of potable water for residents in communities and regions of the island that are usually affected by drought.

The first facility was opened in Pennants, Clarendon in 2017.

Each complex consists of 1,000-gallon water tanks, which are fenced.

McKenzie said that the water shops “have been going exceptionally well”.

He noted that an additional $110 million has been provided in the 2021/22 budget “to build out more of these water shops across the island”.

McKenzie said that the water shops are helping to provide residents with potable water at a lower cost.

“The cost of trucking water has become very expensive, and many of the municipalities are grappling under the burden,” he noted.

Member of Parliament for Eastern Portland, Ann-Marie Vaz, welcomed the plan to provide an additional water shop for Commodore.

“It will bring relief for the citizens, and I am thrilled,” she said.

Mayor of Port Antonio Councillor Paul Thompson said it “is a good move”, to build the facility, as the other system is some 20 minutes away.