Lovebirds flock to murals in heart of capital 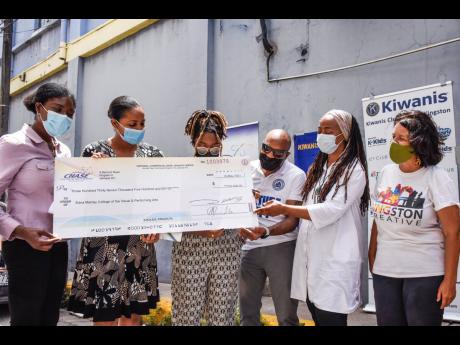 Nicholas Nunes/Photographer
From left: Dr Adella Campbell, distinguished past president, Kiwanis Club of Kingston; Latoya Aquart-Foster, project manager, CHASE Fund; Danielle Shaw, artiste and student of Edna Manley College of the Visual and Performing Arts; Robert Hill, town clerk; Miriam Hinds-Smith, dean at Edna Manley College; and Doris Gross, director and art district lead, at launch the Kiwanis Club of Kingston’s downtown beautification project at the corner of Mark Lane and Harbour Street, on June 12. The mural will be done on the wall in the background. 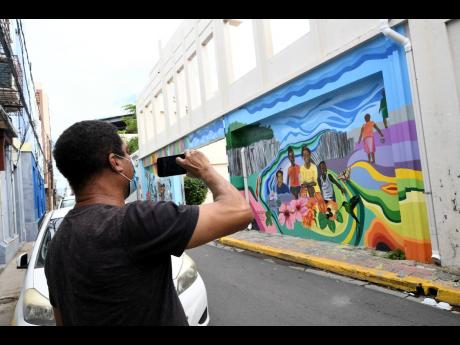 File
A man takes a photo of one of the captivating murals on Water Lane in downtown Kingston in this November 23, 2020 photo.
1
2

Downtown Kingston has suffered years of urban decay, but the addition of several murals in the last few years has created a backdrop for marriage proposals and is increasingly being used by those wanting to express their love to their significant other.

Kingston and St Andrew Corporation Town Clerk Robert Hill said several of these proposals have been reported to him in jest, but he is not surprised that lovers and families are enamoured by the art district.

“It does inspire love, peace, happiness and all that it is certainly created to be,” he said of the murals.

“You would already recognise that the space along Water Lane running from east to west has been transformed in a manner that it has become one of the major hotspots in the country, not even [just] in Kingston,” he said.

The addition of cobbled stones and paving along Water Lane has significantly improved the aesthetics of the area. The plan now is to complete more murals to create a culture key.

“Downtown Kingston was once regarded as a hard place to work, to live, and to enjoy. With the introduction of these beautiful pieces of art, it has begun the transformation of thought and heart and mind,” Hill said.

The project has created jobs for local artists, and Hill is pleased that several groups and companies have been expressing an interest in sponsoring a mural. On Saturday, the CHASE Fund handed over $337,500 to the Kiwanis Club of New Kingston, which represents a portion of the $450,000 it intends to donate to completing a mural on the wall of the Sangster’s Book Stores location at the intersection of Mark Lane and Harbour Street.

Distinguished past president of the Kiwanis Club of Kingston, Dr Adella Campbell, said the location was recommended by Team Kingston Creative, but due to COVID-19, the project was placed on hold. The spray paint for the project was donated by Cedric Douglas, a US-based artist who had intended to propose to his fiancée, Julia, in front of a spray-painted mural in Jamaica.

“Being a renowned spray-paint artist and a romantic person, he wanted his artwork to play an integral role during his proposal to Julia, and what better place to do it than Jamaica? This would see him spray-painting a mural in a selected community,” Campbell explained.

Douglas was unable to visit Jamaica and execute the plan due to travel restrictions, but he shared the idea with his cousin, a Kiwanian, and it was embraced by Campbell.

Douglas has since trained staff and students at the Edna Manley College of Visual and Performing Arts in the art of spray-painting, and they began working on the project yesterday and intend to complete it by the end of the month.

Director and art district lead at Kingston Creative, Doris Gross, noted that the process of redeveloping downtown Kingston will take time, but she is pleased with the support the project has been receiving.

“What we all have in common is a shared vision that downtown Kingston deserves better. It deserves respect and attention, and it deserves a carefully crafted plan and process to get this redevelopment going in an inclusive way and with a lot of partners and stakeholders,” she said.

Project manager for the CHASE Fund, Latoya Aquart-Foster, said the initiative offers an opportunity for creatives at a very challenging time.

“We have been providing funding for projects which, among other things, lead to improvement of libraries, archives, and documentation facilities; support for national- heritage programmes; and the development of the talents and skills of Jamaica’s artists and performers,” said Aquart-Foster.