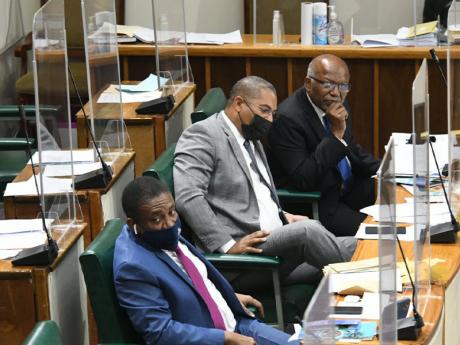 In what appears to be a move to re-seat Wright from the Opposition front benches, St Mary Central MP Dr Morais Guy changed seats to occupy the chair on which Wright briefly sat last week before disappearing from the sitting - Rudolph Brown photo

Dalrymple Philibert is of the view that Wright, a minority MP, belongs on the Opposition benches seeing that he no longer sits with the Government.

The Speaker sought to downplay the issue saying that the seating arrangement for Wright was not contentious.

But Leader of the Opposition Mark Golding had a completely different view.

“As far as I am concerned it is a contentious matter because the circumstances of which a member from that side is now being asked to sit on this side is a matter we take very seriously,” he said.

However, Dalrymple Philibert hit back saying that across the Commonwealth if an MP is not a member of the Government that person sits on the Opposition benches.

“It is not contentious. If it is contentious it is only in your mind,” the Speaker declared.

He said the question of whether someone supports the prime minister and votes with the Government side or not, is a real issue.

Golding argued that up until now Wright has been a strident supporter of the prime minister.

He said that there was no reason for suspecting that the Westmoreland Central MP had changed his position.

“Under our constitutional arrangements it does not matter whether you are JLP or PNP or any P, what matters is whether you support the government's principles and programmes and vote with the prime minister on matters – that's what makes you a government MP,” Golding insisted.

Wright returned prematurely last week from leave he obtained from the House and greeted and sat briefly beside Mikael Phillips who is the MP for Manchester North West.

In what appears to be a move to re-seat Wright from the Opposition front benches, St Mary Central MP Dr Morais Guy changed seats to occupy the chair on which Wright briefly sat last week before disappearing from the sitting.

Guy, who was posing questions to Health and Wellness Minister Dr Christopher Tufton, sought permission from Dalrymple Philibert to speak from a seat other than his own.

This elicited laughter and heckling from Government members.

Leader of Opposition Business in the House Anthony Hylton had engaged his government counterpart Edmund Bartlett and the Speaker to change the seating arrangement to accommodate Guy.

Commenting on the issue, the Speaker said she had no objection to the seating arrangements.

Describing Wright as a minority MP, Dalrymple Philibert said that because he took the seat last Tuesday, she would invite “a discussion with the Opposition and the member”.

“...You simply cannot, since the seat was vacant up until last week when a member of parliament took the seat, just displace the person who sat there,” she said.