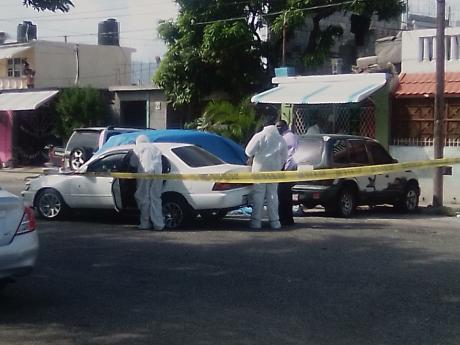 The police in Portmore, St Catherine are searching for the attackers who shot and killed a man on Caymanas Drive on Monday.

No motive is yet to be established for the murder of security guard Jermaine Duffus, who is from the community of Myrtle Way, which is also in Portmore.

It is reported that about 1:45 p.m. Duffus, who does duties at Woody's Food Court in Portmore, was sitting in his white Toyota Corolla motor car in front of the church he attended when four men came up and shot him multiple times.

Family members and friends who converged on the crime scene had to be restrained by the police as they sought to view his body, which was still inside the car.

One grieving family member, who declined an interview with The Gleaner, was overheard saying that Duffus was not involved in any wrongdoing and noted that he got baptised two years ago.

One resident, who asked not to be identified, told The Gleaner that Duffus is known to visit the location.

"He attends the church across the road and he comes here almost daily. Sometimes he will sit in his car for a while and then drove away if the church is not in session," the resident said.

Another resident said four men were seen running from the scene and that they got into a silver car parked nearby and drove away.