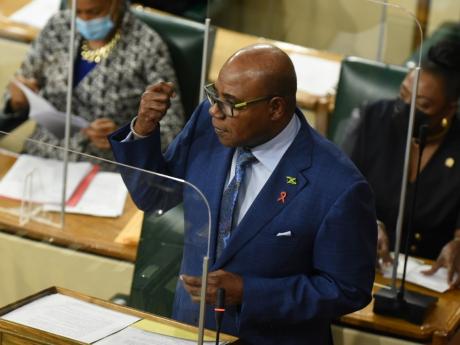 Minister of Tourism Edmund Bartlett speaking in the House of Representatives on June 15, 2021 - Contributed photo.

The Government has allocated another $300 million for irrigation wells in Parnassus, Clarendon to benefit farmers.

The disclosure was made by Minister of Tourism Edmund Bartlett while closing the 2021/22 Sectoral Debate in the House of Representatives on Tuesday, where he highlighted some of the major achievements and projects across various sectors.

Under the Agriculture and Fisheries Ministry, he noted that the sector saw an 8.4 per cent increase in export earnings in 2020, valuing US$238 million, which was up from US$216 million in 2019.

He said that the sector will soon benefit from more than $350 million in new investments that have been made by a number of business entities.

These investments, Bartlett noted, are in addition to $15 billion by Caribbean Broilers to expand its poultry and related operations, Rainforest Seafood's opening of a newly built bammy-making factory, Seprod Limited's exportation of cassava flour, Salada Foods Jamaica Limited's production of turmeric and ginger tea, and B & D Trawling Limited's manufacturing of escovitch sauce.

“To further boost the capacity of the farmers and fishers of this critical sector, we have also allocated a sum of $1.02 billion under the Production Incentive Programme for the 2021/22 financial year,” Bartlett said.

“This will be used to facilitate crop and livestock support, climate change adaptation and mitigation, infrastructure support, grant assistance/agricultural promotions, buy-back programme and equipment,” he added.