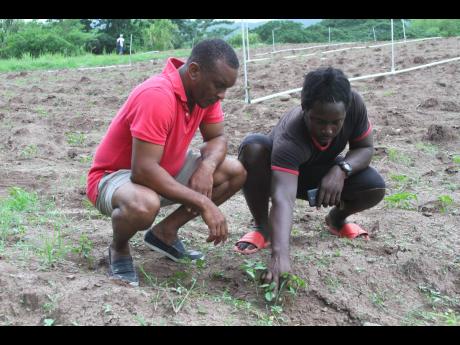 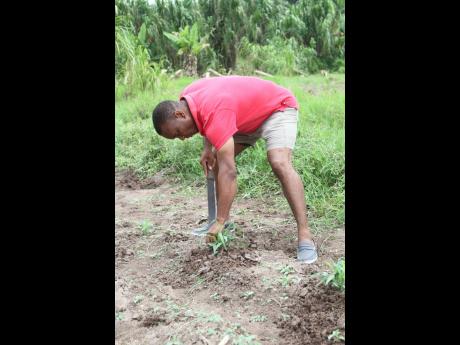 Police detective Shamel Russell is encouraging other professionals to embrace farming as a way of life.

For him, it is a good thing to focus on one’s career and engage in farming at the same time.

Russell, stressing that professionals should use farming as a backup, said food security is a real issue and they will be happy that they did.

“I would encourage anyone to really go into farming,” he said, even as he issued the advice that one virtue will be needed for this industry, and it is patience.

“One thing is important as a farmer is patience. If you try and it doesn’t work out, try again until you succeed,” he said.

Russell’s advice came against the background of his own venture into farming when he started farming callaloo on a piece of land at Bernard Lodge, St Catherine, where he farmed for about three years before transferring to Danks Savoy, the community he grew up in.

After receiving a drip irrigation system from his friends, he was ready to plant his callaloo which, he said, did well. However, in the morning when he went to reap, the crop was affected by beet armyworm.

“A 17-year-old young man looked at me and said, ‘Sir, this is gonna make you or break you, so is either you get up or pack up’. After that process I went on into okra, sorrel and cucumber,” Russell shared on his comeback from that setback.

Another challenge Russell had to deal with in the farming was the issue of praedial larceny but, according to him, he did something out of the box.

“I actually employed the persons who were suspected to be stealing and it worked out,” he shared with a smile.

Russell said he plants more than he needs to market so anything he loses is in the ‘extra’ reserved for that purpose.

“It worked out well that extra would give them a chance to maintain the field and do what they wanted to do,” Russell shared.

Now farming in Danks Savoy, Clarendon, on the outskirts of Summerfield, Russell said he returned to his community because he wanted to give back to those he grew up with.

‘Giving back’ is employing them to work on the farm where he is now focusing his attention on ‘bashment sorrel’, the kind he says bear all year round.

He is fortunate, too, that a river is close by, which he capitalises on by utilising a wobbler sprinkler system he set up, where he pumps water from the river about 200 metres away to the field.

Russell, sharing on his love of farming, said he has been unofficially engaged in the activity since age five, and it was then he developed a love for it.

A member of the Jamaica Constabulary Force for 26 years, Russell said he joined after graduating from Clarendon College as a cadet at age 17.

“I spent a year in it until I was 18, until I was old enough to be accepted as a member of the force, so I have been in the force all my life,” he noted.

Russell’s span in the JCF has seen him serving in Kingston Central, before moving on to Special Branch, and now he is with National Intelligence Bureau.

Commenting on the lucrativeness of farming, Russell said it depends on the marketing strategy and ‘lady luck’.

“It depends on the success of crop during the period. You might have a bad crop, you might have crop when the market is saturated, might have other factors affecting the crop, such as drought and pest. You wouldn’t know until after the crop if you are successful or not,” he told The Gleaner.