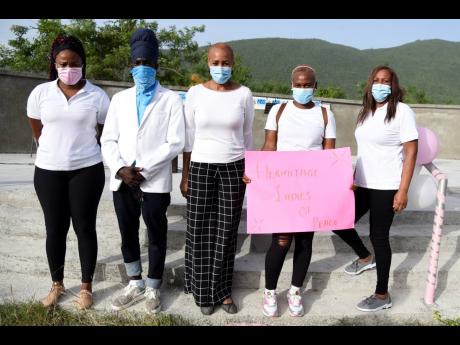 Ramonia Satchwell doesn’t want any of her three boys to be lured by criminals, so she and 62 other women from Hermitage in August Town, St Andrew, have joined forces to form a coalition that will see them mothering each other’s children and maintaining the peace.

The Hermitage Women for Peace Group was officially launched on Saturday and is intended to mobilise women in the fight against crime.

Satchwell, whose sons are 12, eight and four, said that the aim is to institutionalise the African proverb of the village raising the child.

“I don’t want my children being influenced badly or wrongly by whatever it is that they see or hear around them. Where I may control, or I can control whatever happens in my household, it is hard for me to control what happens on the outside,” she said.

Vice-president of the group, Sophia Burris, said it was formed two months ago following an internal dispute that set threatened safe movement.

“We don’t want a parent to be backing her child with the wrongs. We want that even though probably she can’t speak to the child, we want the child to know that she has an army behind her,” Burris said.

“We are here for her, to help her, so that she doesn’t have to be worrying and say that is she one.”

The 39-year-old resident has been living in the community all her life and was the first female selected from the August Town Peace Building Group to do a course in ‘woman and peace building’ at the Eastern Mennonite University in Virginia earlier this year. She was selected by Kenneth Wilson, founding member of the August Town Peace-​Builders.

Burris has been using the skills garnered while studying abroad to help improve her community. She said the women’s group intends to have empowerment sessions, competitions, sporting activities, and other events to help maintain the peace and build camaraderie.

Like Burris, university graduate Monique Johnson intends to tap the skills learnt in first-degree study in social work to transform the community.

“I realise that a lot of females in the community might fall short of financial help, psychological help, and social help,” said Johnson, a social development officer.

She said that the mass transfer of classes to online engagement – precipitated by coronavirus gathering restrictions – has created additional stress for some parents whose children lack computers or Internet access.

Even before the group was formed, Johnson said the women have been coalescing to undertake projects. When a family lost their house in a fire recently, for example, they pooled their resources and resold cakes in a fundraising drive.

President of the women’s group, Linnybeth Henry, said they are hoping similar clusters will be formed in other sections of August Town to curb the scourge of violence.

“The community has rallied around us and they are supporting what we are doing, and we are grateful for that,” she said.

St Andrew Eastern Member of Parliament Fayval Williams said that she is prepared to lend her support to the initiative. Already, the peacemakers have expressed a desire to have branded shirts.

Recording artiste Miguel Collins, more popularly known by the stage name Sizzla, is also in support of the initiative. The deejay, who has sparked controversy in both entertainment and the law, has been credited over the years for his contribution to the development of the community.