‘Not even a donkey I would trust to ride on it’ 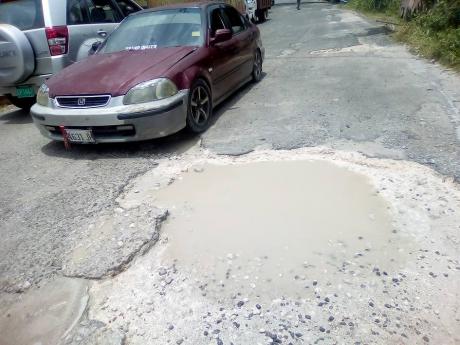 Photo by Rasbert Turner
Motorists squeeze past each other on the Guy’s Hill main road that is pockmarked with potholes. One commuter said that he is so fearful that he wouldn’t trust riding a donkey on the thoroughfare. Repairs are due to commence in July, a counciller has said.

The transport operator, who plies the route from Guy’s Hill to Highgate in St Mary, said the approximately 36-mile-long journey is a horror ride through craters.

“This is costing me dearly with wear and tear of front end and body parts,” James told The Gleaner.

He is not alone in his cry.

James is one of tens of thousands of Jamaicans who lament the ramshackle condition of Jamaica’s undulating rural network that links the most remote districts with bustling towns.

While there is promise that remedial works will be done on the major thoroughfare in Guy’s Hill, St Catherine, users of the roads continue to suffer.

Melvin Weir, too, is demanding urgent action from the authorities to fix the pothole-littered road.

“The conditions cause me to lose revenue, plus my vehicle front end has to be repaired every week. The conditions are simply wicked,” he said.

Anthony Grant, a farmer, was blunt in his condemnation of the infrastructure.

“The road is so bad that not even a donkey I would trust to ride on it. The transport dem which used to take $200 to carry a bag a feed or fertiliser collecting $300, as dem vehicle a tear up pon di road,”

Leroy Dunn, councillor of the Guy’s Hill division, acknowledged the State needed to act fast to soothe the sorrow of commuters.

He said that Minister without Portfolio Everald Warmington, who had earlier toured the area alongside technical personnel, revealed that the road was slated for rehabilitation.

“To the best of my knowledge from information received, work is to commence on the road by July. This, I know, will ease the problem that now exists,” Dunn said.

Over in Springfield, businesswoman Zaveheelea Thompson is longing for relief. The severe COVID-19 restrictions have added salt to her wounds, almost crippling her operations.

Thompson has lived in Springfield for most of her life and operates a small bar. She said business is slow and that the state of the roads has eroded her bottom line, with delivery agents adding a surcharge of sorts on the transport on the treacherous thoroughfare, on which several schools, churches, shops, and other businesses are located.