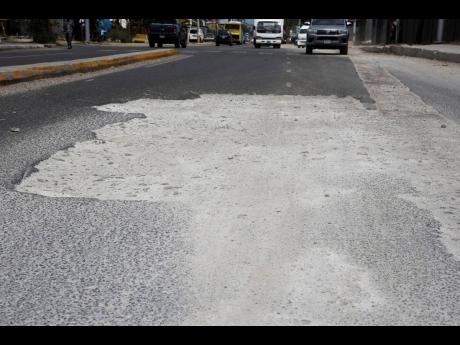 Nicholas Nunes/Photographer
A section of Spanish Town Road in need of attention.

An $11-million contract for rehabilitation works on Spanish Town Road in the vicinity of Kidd Lane has been awarded to Reebaham Services Limited, according to the National Works Agency (NWA).

However, the project is being delayed as the National Water Commission (NWC) is currently doing major upgrades on its pipelines between Six Miles and Blake Road in Kingston.

NWA Senior Director for Project Implementation Varden Downer told The Gleaner that the NWA has instructed the contractors not to begin works on the roadway just yet.

“Because if you do, we are at risk at having the NWC coming to dig it back up. Right now, we are coordinating with the NWC and their contractor in trying to get our work done,” Downer said.

The scope of the works on the section of Spanish Town Road under focus involves the rehabilitation of the road in that area and some drainage improvement as “sewer and other water coming from the Kidd Lane area and adjacent areas ... the contaminants in it are breaking down the asphalt continuously”, Downer said.

The development will bring welcome relief to motorists, who have been expressing their frustration on the toll the poor road surface is having on their vehicles.

St Andrew South West Member of Parliament Angela Brown Burke, in a recent interview with The Gleaner, said that she wished she could wave a magic wand and fix the deplorable patch, which sits in front of her constituency office on Spanish Town Road.

As the wait continues for the works to begin, the NWA said it is waiting for the NWC contractors to position their pipeline.

“They have not been able to tell us, pinpointedly, [when they will finish]. Next week or next month, we should be able to get the pipeline works completed, so they are to come back to us regarding the fittings, etc, that they are sorting through now. As you can understand, the pipeline is a long length, and we would like for them to do the stretch along here, but sometimes you can’t just do a single section like that and suspend that pipe and do in front and after works,” Downer said.

The NWA said that in the interim, shingles will be placed in that area to ease driving conditions.

When The Gleaner visited the location two weeks ago, one motorist said that he had had to purchase lots of parts over the more than two years the road has been in a shambles, even before the pipeline project began.

Another said the suffering has gone on for far too long.