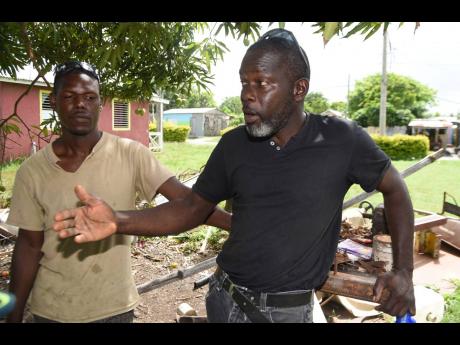 Kenyon Hemans
Steven Whynn (right) and his friend Klan Brown, both blacksmiths from Duckenfield, St Thomas. Whynn explains how he thinks the advent of tourism to the parish of St Thomas will impact the wider community.

It’s not the lack of skill that is preventing St Thomas residents Steven Whynn and Klan Brown from engaging in gainful employment. It is the lack of interest in working for an organisation outside of the ones they are aiming to build for themselves.

The two are among hundreds of workers who were displaced by the shuttering of the Golden Grove Sugar Factory in the parish, an organisation which was the sole source of income for many households in the area.

Unlike many others in Duckenfield, Whynn and Brown, who worked as machinists in the factory, saw its closure as a stepping stone to entrepreneurship.

“Bob Marley say if door lock, window open. A long time we doing metal fabrication on we own. We start with it, then we got a work in the factory and start giving it more time and effort, but now we get the chance to focus on our thing,” Whynn shared, admitting that though business is slow, he is quite content.

His colleague chimed in, “We work 30-odd years with people and the little time I’ve been working for myself I’m better off. We not looking back. I’d rather get help to build what we have. We have the skills to work for other companies but we’d rather do the jobs, charge for it and move. Not go sign up paper as employee … we do enough of that.”

The friendship duo told The Gleaner that they had in fact been planning for the day they operated their own workshop for many years prior, since they were not satisfied with the compensation they received working for others.

“We were putting some things in place before because we start work at the factory from 1991 and from then dem a say it going to lock down. Lies have a way of becoming true ... Every year the sugar industry say they aren’t making any money yet they are always buying the most expensive parts.

“We know principal different from the profit and they set targets that they know we aren’t going to reach, and that’s how they betray us ... by telling us they want ‘12’ even though they know we can’t make more than ‘seven’, so we fight to make 12 and when at the end of the day that target is not met we tell ourselves that ‘the boss nuh mek nothing today’, so we satisfy with whatever they pay us and that’s the mental game they play. So every year you constantly put out 100 per cent but not seeing the benefit,” Whynn explained.

The machinists also shared that they are exploring other business ventures.

According to them, “We’re trying to set up a castor oil farm. We build some machines to extract the oil from the seeds. It’s a young business but we are trying to get it to a place where we can start hiring others because unemployment is very high here.”

The two welcomed prospects for local tourism, which they believe will curb the joblessness in their area.

“We have a lot of places like Duckenfield Hall – a Great House and a few towers, including the Lighthouse that has a lot of land nearby can build villas where people can go clean and employ the youths as tour guides ... A lot of houses here on the estate harbouring rats. They can be rented out to benefit the community. We have a great white sand beach that doesn’t even need coast guards the way it shallow. Even a baby can go out and play in the water,” Whynn said.

While they admitted that with development comes the possibility of heightened crime, Brown noted that a united effort by residents would be enough to prevent an upsurge in criminality in their usually peaceful community.