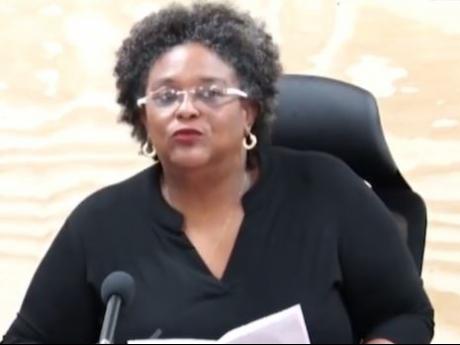 Prime Minister of Barbados, Mia Mottley, has disclosed that at least 13 houses have been damaged, six with full roof losses, as a result of a freak storm that occurred on Wednesday night.

“This ranges from St Joseph to St Andrew to St James to St Philip. So it literally has taken pockets across the island, Mottley said.

“We also have reports of a number of fallen trees across significant areas and indeed when we look at the roads that are blocked, we have categorised them between those are priority in order to be able to remove the blockages on the main highways and then to be able to deal with the subsidiary roads thereafter that are affecting districts.”

She stressed that along with main highways, priority will also be given to roads that are subject to significant slippage like White Hill, St Andrew.

Mottley said public works contractors have been mobilised to clear the roadways.

She added that the government will be seeking to assist residents who need help in repairing the damage.

Mottley acknowledged that although regrettable, it could be a lot worse.