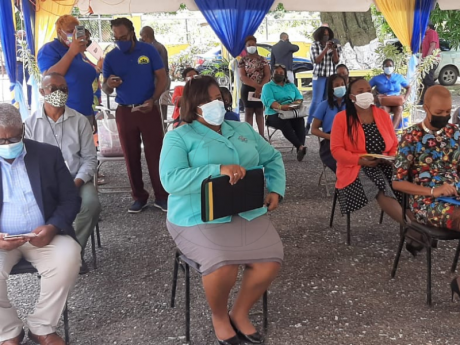 Media personnel covering the handover ceremony of tablets to students in Westmoreland were earlier urged not to capture images of Education Minister Fayval Williams that will include Westmoreland Central Member of Parliament (MP) George Wright.

The Gleaner team had started taking photographs at the event when the reporter was approached by a senior communications spokesperson who asked if the section with the embattled MP could be cut off.

This is the first public function for Wright, who recently resigned from the governing Jamaica Labour Party (JLP) to become an independent candidate.

He was not listed on the programme to speak.

However, Williams recognised Wright as the independent MP before naming Dawnette Foster, the JLP acting chairman for the Central Westmoreland constituency.

"Let me acknowledge independent Member of Parliament Mr Wright for Westmoreland Central, Councillor Dawnette Foster from the Cornwall Mountain division," Williams said while speaking at the function now underway at the Ferris Primary School in the parish.