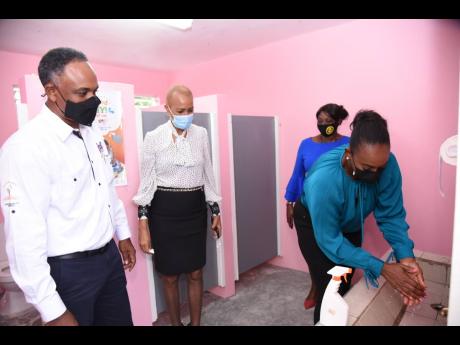 Contributed
Member of Parliament for East Rural St Andrew Juliet Holness (right) washes her hands at one of the washbasins in the new sanitation block at the Westphalia Primary School on June 10. Looking on (from left) are Managing Director of JSIF Omar Sweeney; Minister of Education, Youth and Information Fayval Williams; and Sylvia Walker, principal of Westphalia Primary School. 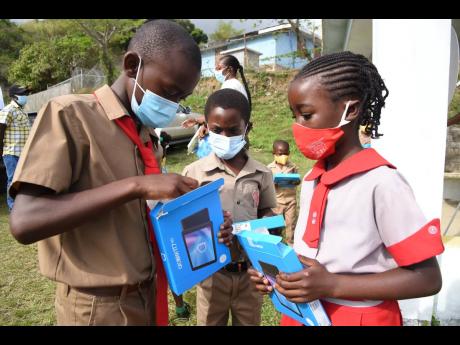 Ian Allen
From left: Javian Dormer, Kashan Sterling and Tessan Taylor, students at the Halls Delight Primary and Junior High School in St Andrew East Rural, could hardly wait to open their new tablet computers after they received them from Fayval Williams, minister of education, youth and information. Occasion was a handover ceremony for the school’s sanitation blocks last Thursday.
1
2

St Andrew East Rural Member of Parliament (MP) Juliet Holness has made an impassioned plea for works authorities to address the ramshackle roads in her constituency, which she said are frustrating the efforts of parents to give their children access to education.

She said that students who lived in regions that lacked basic infrastructure had to work much harder to achieve than children in more developed areas.

The Halls Delight and Westphalia primary schools were recipients on the day. The initiative forms part of the Government’s thrust for improved sanitation and hygiene in schools. It was undertaken through a collaboration between the Ministry of Education and the Jamaica Social Investment Fund (JSIF).

While expressing gratitude for the gift of the new bathroom facilities, she appealed to state agencies to put the icing on the cake with better roads.

Holness expressed surprise that Education Minister Fayval Williams made the trip up into the hills.

“I am still shocked that you are up here ... . When minister called and told me she was coming I said, are you sure? And I didn’t tell her anything else, because I sought of felt guilty because I know what the journey would be like for the minister coming to Halls Delight,” Holness said.

Holness said her heart was torn in 2016, while campaigning, when she saw a student carrying a five-gallon bucket of water.

The member of parliament praised parents, principals, and teachers in the constituency for their sacrifice.

“I will be honest to you. In many of these areas in my constituency, our parents are illiterate; and if your parents, coming out of the farm, coming out of the bush, cannot manage to help you with the maths, English and social studies, I can tell you it is to the credit of our schools, and parents who are capable of helping, that you get good students,” she said.

The two-term representative said she has had dialogue with National Works Agency officials, who have committed to approving rehabilitation of the roads.

Holness believes that easing the commuting concerns in Halls Delight and other communities would help to turn out better-performing students.

“We could do so much more, we could grow this community. We could have our children at 100 per cent level,” she said.

During his remarks at the handover, Sweeney said no cost was too great in ensuring that children – which he said are the nation’s most valued treasure – could thrive and fulfil their potential.

In relation to the rehabilitation of the roadways by Holness, Sweeney said he has had advanced talks with the MP concerning those developments.