Bittersweet day for recipient of Food For The Poor house 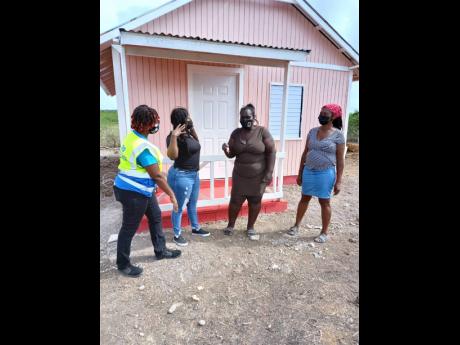 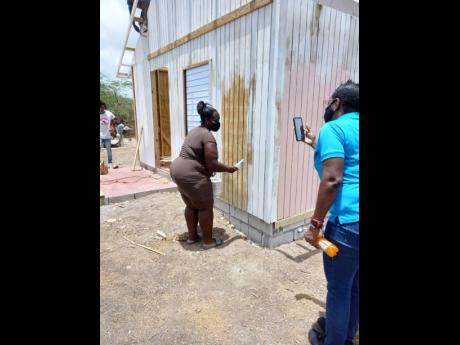 Photo by Cecelia Campbell-Livingston
Cislyn Williams helping to paint her new home, while Marsha Burrell Rose, marketing manager for Food For The Poor, looks on.
1
2

It was a bittersweet day for Cislyn Williams and her mother, Joan Williams, on Tuesday at the completion of their dream house in Portland Cottage, Clarendon.

Cislyn, who was anticipating that her son, 21-year-old Devon Powell, would be a part of the excitement, could not hold back the tears as she mourned his death, which occurred the week before.

“If someone did tell me that I would have this house, I would say it’s a lie. But my son, he was a big part of this. He was the one who boosted my confidence, telling me that I would get the house ‘soon’.”

Cislyn said Powell worked tirelessly in preparing the land on which the house was built, and even told her to sit down when he noticed the sun was too much for her, while he completed the job.

After getting a dream about a friend driving a car and her husband dying in a crash, she said she warned her son not to drive any car, unless it was his.

“I told him, this is your year,” Cislyn shared. For the first time she went to bed without her son telling her goodnight, a ritual they shared over the years. She woke early in the morning and had a dream that she saw him walking into the house.

“I just see him come in the house. Him just walk in a white and black and sey to me sey, ‘Mummy don’t sey nutten. Done now, just done now’ and went through the door,” she related, added that it was the beginning of her sorrows as she awoke to the news that he died in a crash along the Lionel Town road.

As she watched the workmen labouring away on her house, she couldn’t stop the tears from flowing as she shared that part of the joy she was supposed to feel was no longer there. While she expressed gratitude for the generous donation of the house which is valued at over $500,000, she cried for her only child who can never share in it.

“It was always his desire to live in Portland Cottage and now he will be buried there,” his uncle, Hubert Eubanks, told The Gleaner as he reminisced on his nephew, who he said could not say no to anyone as he gave of his time and labour.

On hand to give their support was the Joe Bogdanovich-led Downsound crew, which included Rebel, Rolexx and Cecille.

Ce’Cille, who was busy painting away, said things like that always get her excited.

“I like doing these things. I’m not good at organising things like this, I am very bad at it, so kudos to Food For The Poor (FFTP) and BOOM and everybody that’s involved in this. I am very happy to take part,” she shared.

Meanwhile, Tamara Ward, senior marketing manager at Wisynco, in sharing her company’s involvement, said, “the more we can actually give back, the more we can bring attention to these types of causes. It is really Jamaica coming together and lifting each other up; and us being a brand that is traditionally and authentically Jamaican. What’s important to us is that, if you’re picking up a BOOM, you know that you are supporting building Jamaica, building up our communities, and that’s really what it’s all about for us.”

Kivette Silvera, executive director, FFTP, while lauding BOOM for its generous donation which is valued at over $5 million, said others don’t need that to be involved.

“You can give from your heart, if it’s even a dollar, two dollars, it doesn’t matter. You can come on board even to volunteer because volunteerism is key to helping our society. Even in our youngsters we have to help them to learn to give back, even in the little ways that they can,” she shared.

Cislyn, who is the ninth recipient of the 10 FFTP, BOOM Energy Drink-sponsored houses in commemoration of its 10-year anniversary to help provide essential shelter to help contain the spread of the coronavirus, was overwhelmed and thankful.