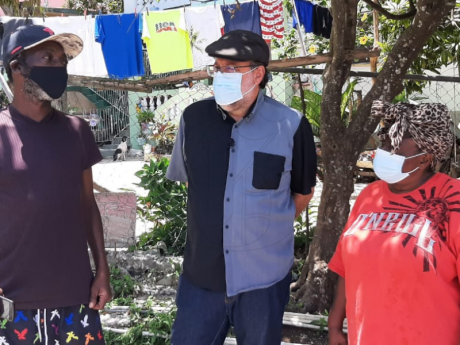 Opposition Leader Mark Golding is now leading a tour of some St James communities affected by the recent spate of killings in western Jamaica.

The Gleaner team met the touring party on its second stop in Salt Spring where the officials visited with Nora Sterling, a resident whose son, Tiron DaCosta, was murdered earlier this month.

Dr Dayton Campbell, general secretary of the People's National Party, said the party president and his team will also be interacting with supporters.

"We are here just to expressed our condolences to the family and to give support to the members of the community," he said.

Detectives from the Montego Bay Criminal Investigations branch (CIB) are still probing the June 8 shooting incident which claimed the life of DaCosta, a steelworker from the tough inner-city community of Salt Spring.

Reports are that he was attacked and shot multiple times at about 5:00 p.m. allegedly by a group of men armed with rifles and handguns.

He was later pronounced dead at the hospital.