New policy for public board appointments will include Diaspora members 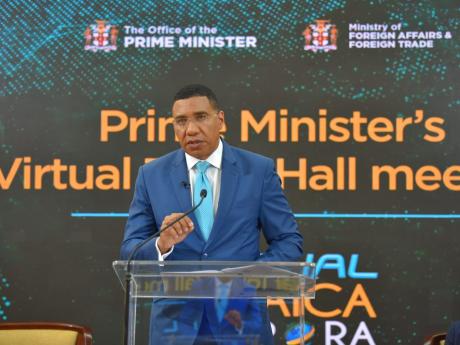 Prime Minister Andrew Holness says the new policy being developed to guide the appointment of persons to public boards will include measures to better accommodate members of the Jamaican Diaspora.

“When this policy change occurs, which will happen very shortly when we change the Regulations, the scheme will see [an] open invitation for Jamaicans to apply to serve on public boards, and that will be open to, of course, persons in the Diaspora,” he said.

Holness was addressing a Prime Ministerial town hall on Wednesday (June 16), which was held as part of a virtual Jamaica Diaspora Sustainability Symposium.

The changes are to make the process of appointing persons to the boards of public entities more open and transparent.

The Prime Minister noted that the policy of the Government “is to utilise the talent pool that exists, and so on several public boards there are members of the Diaspora”.  He noted, however, that this has been without having a specific procedure in place to address such appointments.

The Prime Minister said there may be some requirement for Diaspora members to travel to Jamaica for a certain number of meetings “but as we have seen with virtual meetings and the reliability of the virtual technology, that, too, may change”.

“So I would say in the coming months, you should look out for that change in our policy for the appointment of members to boards, which will see to allowing persons to apply to put their résumé in a pool and become eligible for selection on public boards,” he said.

The two-day symposium, June 16 and 17, was organised by the Ministry of Foreign Affairs and Foreign Trade with support from various partners.

It was held under the theme 'Jamaica and the Diaspora – Stronger Together for a Sustainable Future'.