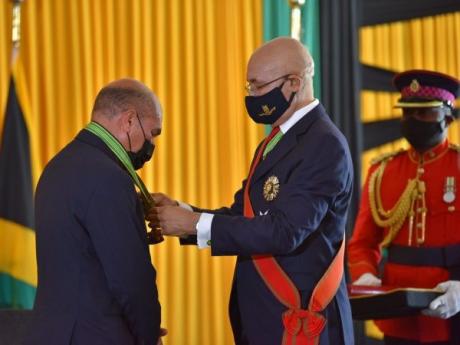 Hugh Wayne Gentles has officially been sworn in as Custos of Trelawny,  by Governor-General Sir Patrick Allen.

The ceremony took place at the Ocean Coral Spring Hotel in the parish.

In his address at the ceremony, Prime Minister Andrew Holness said the post of Custos forms an important part of rebuilding the nation.

“The post still maintains its cherished value; it represents the call for unity and peace, as part of a system of values which must be engendered in our society,” Holness said.

“As Jamaica grapples with an epidemic of violence, Custodes are part of the framework of rebuilding Jamaica as a peaceful, caring, loving and dignified society,” the Prime Minister added.

Holness emphasised that dignity is a crucial aspect of the administration of public affairs.

“Our administration of public affairs reflects the values of our society that speak to our civility, and the office of the Custos, flowing from the Head of State, must exemplify, reflect and actively promote the dignity of the State,” Holness noted.

The Prime Minister said that Gentles has exhibited dignity and a passion for service, as well as “a love for his country and people”.

He also thanked the outgoing Custos, Paul Muschette, for his service and contribution to the parish.

For his part, the Governor-General said that the new Custos will provide leadership to inspire and instil a strong sense of direction for the citizens of the parish.

“By accepting the invitation to serve, Custos Gentles has indicated his willingness to assume the role of the Governor-General's representative in service to the people of Trelawny. He knows the parish very well, he has served as a Justice of the Peace since 1991 and has given outstanding community service over the past 40 years, especially in the areas of health and education,” he said.

“He is, therefore, well placed to serve the entire population of over 76,000 persons wherever they live in the parish,” the Governor-General added.

He pointed out that youth empowerment will be a critical aspect of his post, as he will assist the I Believe initiative, which was created “to engage young people to grasp the vision of a new and better Jamaica, to inspire them to contribute to national development, propel them to embrace what is right in Jamaica and what will be helpful to their development”.

Meanwhile, the Governor-General thanked the outgoing Custos for his service of almost 12 years.

“His outstanding work and stewardship has left an indelible mark on Trelawny. He strongly supported the Governor-General and the programmes of the office. Custos Muschette, I wish you good health and success as you transition to another phase of your life,” he said.

Custos Gentles in his response, said he “is humbled by the honour bestowed on me,” and thanked the Governor-General and the Prime Minister for their decision to appoint him to serve his country.

“I truly believe that there is no higher calling than to be of greater service to first God, country and then to your fellow human beings. This appointment helps me to do this,” he said.

As part of the proceedings, the Order of Distinction, Commander Class, was also conferred on Custos Gentles by the Governor- General.