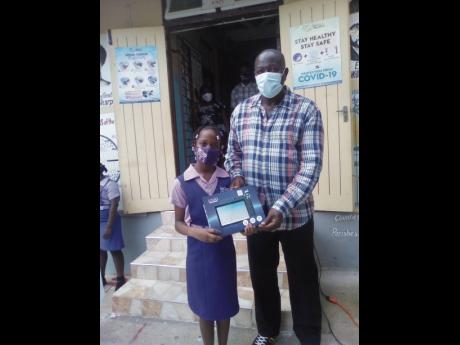 Photo by Rasbert Turner
Kaylayia Chambers (left) is presented with her tablet on Monday by past student Hornet Williams at the Rock River Primary School in St Mary. 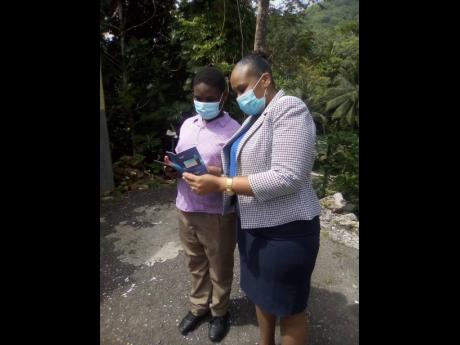 Former Deputy Superintendent of Police Hornet Williams said he walked over five miles to get an education when he was a Rock River Primary School student. Now, he’s hoping to ease the plight of the school’s current crop of students.

On Monday, Williams donated 12 tablets valued at $200,000 to the South East St Mary institution and gave the students some advice. “I am pleased to be able to help these students to better learn through the online platform. I want to say that you students must take care of these tablets, as when I was a student here, nothing like this happened, so you need to adapt and learn,” Williams said.

Moneque McKoy-Walker, principal of Rock River Primary, said the former crime-fighter is dedicated to the growth of his alma mater. “He is a consistent and dedicated donor to Rock River Primary School, even before I became principal six years ago. He has donated books, pencils, cash and now tablets. These are very relevant to the online platform as even last week during the diagnostic test, we have to lend some tablets to students,” she said.

McKoy-Walker said that donations such as Williams’ provide significant benefit to the community, the 60-year-old institution, and more than 60 students. “Mr Williams is a great source of inspiration, and we are thankful for his kindness and need others like him to continue the school’s development,” she said.

One mother, whose two children benefited from the donation, was very thankful for the gesture. “Bwoy this is very helpful to my two children where their online studies are concerned. I have been having problems with the two tablets between the four of them, but with this timely gift, I am pleased, as it can only get better,” Donnette Grant said.

Her sentiments were echoed by one of the recipients, 11 -year-old Ki-Jaun Brown, who said that he was very thankful for the tablets. “I am very thankful that I have received this tablet; I want to further my education; therefore, I need to study more. I know that this tablet will give me more time to study and do my school work,” the grade-six student said.