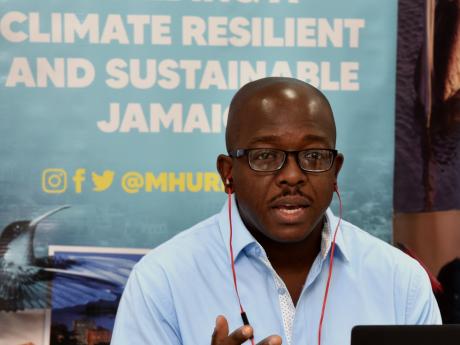 The Ministry of Housing, Urban Renewal, Environment and Climate Change is in the process of developing Jamaica's first National Adaptation Plan (NAP).

Portfolio Minister, Pearnel Charles Jr. said that during this financial year, Jamaica will be able to access a US$1.1-million grant from the Green Climate Fund  to begin the preparations.

He was speaking during a recent Facebook Live event hosted by the United States Agency for International Development to discuss the measures the Government is taking to combat climate change.

The Minister noted that the NAP will include a private-sector engagement strategy, a finance strategy and an investment plan for adaptation.

“It is imperative that we take the necessary actions to become climate resilient and quickly, otherwise the impacts on all sectors will be devastating and, in many cases, irreversible," he said.

He continued: “Without collective and concerted action, climate change could prove to be a major obstacle in achieving development goals, as well as our overarching Vision 2030 goal of making Jamaica “the place of choice to live, work, raise families and do business,” he expressed.

Minister Charles noted that a pilot of the Local Climate Adaptive Living Facility (LoCAL), which seeks to strengthen the capacity of municipal corporations to integrate and finance climate action, will also be tested as part of the nation's climate-change response.

“Preparatory work for this pilot began last fiscal year and will be significantly advanced during this fiscal year. At least four selected municipal corporations will benefit from capacity building and financing opportunities such as performance-based grants over two fiscal cycles,” he said.