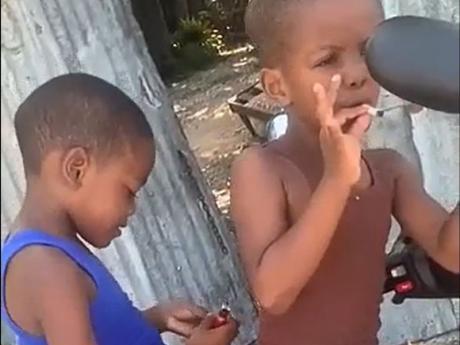 CPFSA said it is concerned about the increased reports of incidents where children are being exposed to moral danger.

The Child Protection and Family Services Agency (CPFSA) has located the two boys seen in a recent video smoking what appeared to be marijuana.

In a statement today, the CPFSA said on Friday, information received led to locating the children.

"A team of investigators visited the community where an assessment was conducted with the children and their families, in identifying the most suitable intervention and continued support that are needed," the statement read.

CEO of CPFSA, Rosalee Gage-Grey, said the agency is concerned about the increased reports of incidents where children are being exposed to moral danger.

"Children learn by mimicking behaviours of those around them. We are therefore calling on our parents and guardians to ensure that their children are properly supervised at all times by a responsible adult,” she said.

She added that one of the concerns emanating from the video is the early exposure to substance use.

"We also saw a similar video last year involving a toddler who was given alcohol and cigarette. As a country we must come to the point of realising that these matters are not a joke and can lead to possible addictions at an early age."

She continued: "Additionally, we are encouraging adults and youth not to perpetuate child abuse with the filming of these actions in jest."

Gage-Grey thanked the public, whose assistance she said was instrumental in locating the boys.

She also encouraged persons to report known or suspected cases of abuse before matters escalate.