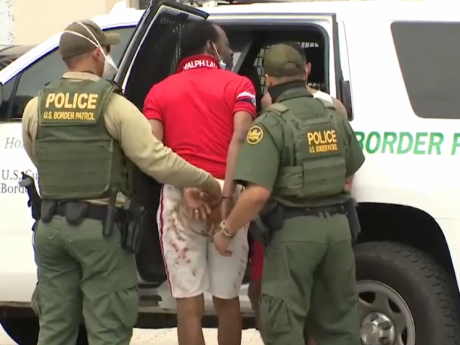 United States Border Patrol officials detain one of 14 migrants who came ashore on the intracoastal waterway in Pompano Beach, Florida, on Thursday. Several of them are Jamaicans.

Commissioner of Police Major General Antony Anderson has divulged that four of seven Jamaicans who arrived on a boat illegally in the United States last Thursday are linked to criminal activities in Jamaica.

Speaking this morning during a press conference hosted by Jamaica House, the top cop said that local law enforcement authorities are now in dialogue with their US counterparts to exchange additional information on the illegal migrants.

“We have been working with our international partners in this and have found criminal traces for four of the seven so far and only a couple of weeks before that, we know that another person who is wanted in Jamaica tried to enter the United States in a similar way but was found and sent back to us,” Anderson said.

Local law enforcement officials have said that among the illegal migrants was a former don who had multiple convictions in Jamaica.

Last Thursday, US authorities detained 14 migrants who were travelling in a boat that came ashore hitting a sea wall in South Florida.

It was reported that the migrants were coming from Jamaica and had first travelled to The Bahamas.

One of the migrant men told a US television station that he was fleeing from violence in his country.

“There's killing going on there. We want a better life. No life is in Jamaica right now,” the man said, who has now been identified as Deon Clarke, popularly known as 'Boobie Skeng' who is reported to have wielded significant influence in the east Kingston community of Dunkirk.