Mikael Phillips worries for his daughters 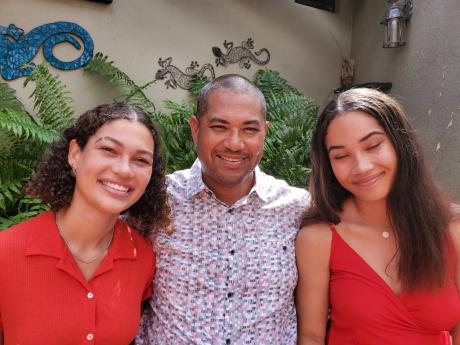 Contributed
Mikael Phillips and his daughters, Isabel (left) and Gabriela.

Mikael Phillips, member of parliament (MP) for Manchester North Western, is father to daughters 18-year-old Isabel, a soon-to-be University of the West Indies (UWI) psychology student, and Gabriela, 16, a fourth-former at Campion College.

The third term MP, who chairs Parliament’s Public Administration and Appropriations Committee, is also an opposition spokesman and a vice president of the People’s National Party. The son of Dr Peter Phillips, a former government minister and opposition leader, he has vowed to spend quality time with his girls despite the demands on his time.

“There are many gifts that God has given us. I believe that children is one, and marriage is the other. Children change your life totally, especially if you are a responsible parent. It gives you a different perspective on life, on some of the things that my parents used to say and we used to think they were wicked. Now, I have a better understanding of what they were teaching us,” Phillips told The Sunday Gleaner ahead of today’s celebration of Father’s Day.

“Having children and seeing that you are saying some of the same things your parents said to you, it makes you laugh. Experience is the greatest teacher,” he acknowledged.

Phillips recalled how his stepmother – Sandra Phillips, Queens Counsel – would complain that their father was too soft on them, but coming full circle, he said his wife Shelly (second marriage) has the same argument.

With full appreciation for his stepmother, he contends that “there must always be a safe haven to which they can run”.

When Phillips first ran in 2007 in St Andrew East Rural, his daughters were four and two years, respectively, and he “described them as always being part of his political life”.

Spending time with his father, Dr Phillips, was going on political outings with him back in the day, the identical playbook is happening now especially with Gabriela, whom he described as “ a social butterfly”.

Though both have appeared at constituency activities, Isabel shows “no interest for politics”, and it’s okay, he said, adding that there is no pressure for either of them.

“Very talented piano and guitar player, but very reserved,” he said of Isabel, who is also athletic and independent.

A fluent Spanish speaker, she would have been studying in Spain had it not been for the pandemic, which saw plans altered and she applied to The UWI.

Gabriela is “the more outgoing”, a Manchester United fan and also Formula One fan. She will go bird-shooting and will spend the weekend in the constituency, as well as occasionally going to Parliament.

“It is a difficult balancing act,” he said recalling times lost while his own father did national duties.

“You try and make sure the same things don’t happen. But it is very hard, and the politics is very demanding. So I try not be absent from home too often and for too long. Thank God for my wife. She ensures that we have dinner [together] as often as possible and take a weekend out of the month together,” Phillips said.

Jamaicans are not sufficiently appreciative of the sacrifices made by elected representatives across the board, he said, adding that there is less sympathy for them and their families because of how they are portrayed.

The little boy from Standpipe near Liguanea, and who went to Excelsior Pre-primary and walked or took the bus to and from Hope Valley Experimental School in August Town, has not shied away from his roots. He reminisced on the safety of playing in the gully, pushing old tyres, and making his own kites, compared to the privilege of his children, who now live in an upscale community and have electronic gadgets as play things.

They know the spaces and places of his parents and grandparents.

“It’s important for me that they have values. But I am worried, because the Jamaica I grew up in, I don’t see it coming back,” he said. “I was safe. I went many places unafraid, but I wouldn’t let them do that now at all,” said Phillips, adding that he hopes his contribution to public life will make Jamaica a better place for all.