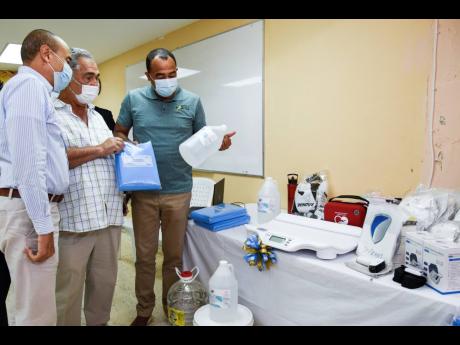 The May Pen and Lionel Town hospitals in Clarendon on Friday received donations of more than $12m worth of equipment from William ‘Billy’ Shagoury, custos rotolurum of the parish.

Nadine Preddie, CEO of Lionel Town Hospital, told The Gleaner that the donation of a defibrillator ended a more than two-year need for the Type C institution. She said while they found alternatives to resuscitate patients, the task was very challenging. “We were in dire need of that piece of equipment for some time now, and we reached out to Mr Shagoury and he graciously offered to purchase that equipment for us and we are elated. I know my staff will be happy to know we now own our own defibrillator at Lionel Town Hospital,” she said.

Preddie, noted that the hospital, located in southern Clarendon, is in need of other improvements, including an upgrade of the electrical system. “The facility is very old. Most of the equipment there are old. The buildings are old. We need a facelift of most of the building, and so any kind of assistance given is well received and well needed. We don’t have diagnostic capabilities there – like an X-ray or ultrasound unit – so that is a great need,” she said.

Eugena Clarke James, acting CEO at May Pen Hospital, told The Gleaner that the donations of sanitisers and personal protective equipment will optimise service delivery at the facility. She said that the hospital has to provide masks for patients who sometimes turn up at the hospital without, which has been putting a strain on the facility’s resources.

“We see nearly a thousand patients daily on this premises, and we optimised the protocol that’s related to making sure that the COVID-19 virus does not spread all over the place. There are times when patients come to the hospital and they do not even have a mask, so we don’t turn anyone from the facility, and we have to ensure we practise universal precaution to ensure that infection control is optimised,” she said. Clarke James noted that the number of COVID-19 cases being admitted at the facility has been reduced by about 50 per cent.

Minister of Health and Wellness Dr Christopher Tufton, in his keynote address, lauded the custos for this donation. “Public health is partnership, and what we have not been able to do enough, is to create that sense of partnership, because too many of us depend on the system to rescue us when we need it,” he said. The health minister said that reckless behaviour of some people puts a strain on the public healthcare system.

“How we live and conduct ourselves unnecessarily places the public health system under undue pressure. Some of the reasons people turn up at hospitals could be avoided if we went about doing things differently, and what we have done is to stress out the infrastructure, place the personnel under the pressure,” he said. .

Tufton, who noted “big plans for Clarendon’s healthcare system,” said that the May Pen Hospital is to benefit from a renovation valued at about US$2m, and expansion plans are under way for health centres in the western and eastern parts of the parish.