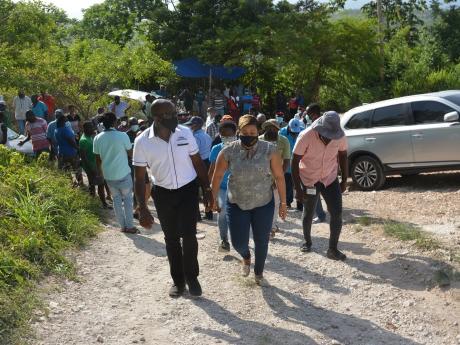 Minister of Housing Pearnel Charles Jr is calling for greater collaboration among housing stakeholders in St Ann to halt the spread of squatting and informal settlements.

Following a tour of several communities in St Ann North Western on Friday, Charles Jr said there is an emerging “movement” surrounding informal settlements, in that they are now being spearheaded by wealthy criminals looking to prey on the poor.

“You have now a movement from squatting and informal settlements being for poor people to now being for criminal rich people who are trying to come and manipulate poor people,” he said.

“They bring their big excavators and backhoes to make roads and clear lands and then sell it to poor unsuspecting people. Some are ignorant and some know they don't own the land, but still carry through,” he added.

Charles Jr outlined that these unplanned developments devalue the properties of lawful homeowners who must now come together to stop this growing trend.

“I am sending a clear message to everybody, it is our responsibility. I know it will take some funds, I know it is not easy, I know we have tried, I know that we have put stop notices, I know we have done some things, but Jamaica demands us to do more,” Charles Jr said.

“We are all here with the ability and authority to do more; not to kick off people off lands, but to protect the people who are there and to help them put themselves in a planned community,” he added.

The day's tour took Charles Jr to the communities of Stony Hill, Mt. Edgecombe, Seacrest and Belair, Phases 1 and 2.

He said the objective of the tour was to identify and solve a number of underlying issues in these areas that can lead to further infrastructure and sustainable development.

“We are also being realistic and pragmatic because it is important to know that any step forward will be at a cost,” he emphasised.

“My responsibility as Minister of Housing is to ensure that the money that we are trying to find will be spent the best way possible for the people, those who have lots and are lawful owners and deserve to have infrastructure, and those who need support from the Government,” he added.