Struggling mother of three gets keys to own home 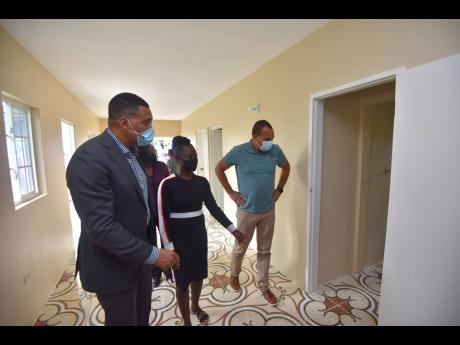 Relief came on Friday for 43-year-old Charmaine Lewis of Pedro district in Point Hill, St Catherine, when she was handed the keys to a new three-bedroom house under the Government’s Housing Opportunity Production and Employment (HOPE) Programme.

Prime Minister Andrew Holness, who handed over the unit to Lewis, said it is a well-deserved benefit for the single mom who was raising three boys in a substandard one-room structure.

“It is a symbol of hope for other people who might be in similar circumstances, whose housing and shelter solutions are substandard, and those living under inhumane conditions,” Holness said.

Half a billion dollars has been allocated to the National Social Housing Programme and that amount will be maintained, or expanded, in the next fiscal year.

Holness emphasised the Government’s commitment to creating affordable housing solutions for Jamaicans in planned settings, while warning against squatting and the mushrooming of illegal settlements.

The Government has committed to building 70,000 housing units over its five-year term, some of which will be priced between $15 million and $25 million.

But the nub of Jamaica’s housing crisis – with around a third of the population estimated to be squatters – is that thousands of citizens are unable to purchase homes because of meteoric prices and cannot qualify for viable mortgages under the state-owned National Housing Trust.

However, the prime minister said that his administration would seek to carve out housing for low- to middle-income Jamaicans ranging from $3 million to $6 million, even if its infrastructure was basic.

Holness has been on a campaign to drive down housing costs by urging construction professionals to consider cheaper options than block and steel. However, Jamaicans have been largely averse to the take-up of alternative building materials, believing that traditional concrete homes are safer and more socially respectable.

Developers have also been resistant to tap public funding to construct low-price housing.

More than 300 persons have registered to participate in the Low-Cost Housing Design Competition, which will end in August.

The prime minister said that housing solutions at Bernard Lodge, with an initial 3,000 units, will go for $15 million, while and Catherine Estates will be priced in the range of $6 million.

A new development will also begin soon at Innswood.

“I thank you for doing this for me and my family. I very much appreciate your support during this challenging time,” she said, imploring the HOPE Programme to continue transforming the lives of needy Jamaicans.

The three-bedroom, one-bathroom unit, with open living and dining room and an enclosed kitchen, was constructed at a cost of $8 million on lands passed down to Lewis from previous generations.