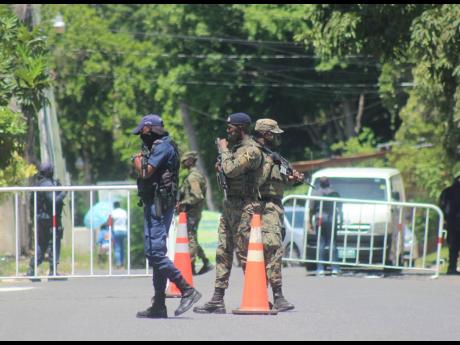 Ashley Anguin/Photographer
Police and soldiers man a security checkpoint yesterday at the entrance to the Norwood community in St James, where a zone of special operations is was declared on Sunday.

While the social-intervention component of the zone of special operations (ZOSO) in Norwood, St James, is likely to bring the most long-lasting benefits, crime-weary residents jut want to seen an end to the bloodletting.

“I just want the guns to be taken out of the community because they have caused too much hurt and pain for so many families, including myself,” said a nervous woman who spoke to The Gleaner. “I lose my mother to this violence, and I have also lost other relatives.”

While she was delighted to wake up on Sunday morning to see the community blanketed by soldiers and police, who were a part of the 48-hour curfew declared ahead of the ZOSO, the woman was sceptical about the long-term success of the security initiative.

“Based on what I saw when St James was under a state of emergency last year, I believe the gangsters will just put down their guns and wait under the ZOSO end to start up again,” said the woman, urging residents to find creative means of giving tips to cops. “I want the police to clean out the guns and all the bad man dem.

An elderly woman, who was so scared that she did not even want her voice recorded, told The Gleaner that the ZOSO is many years late, arguing that the authorities waited until gangsters had ruined the community.

“We should have gotten the ZOSO in 2017, when Mount Salem got it, and many lives would have been saved,” she said as she looked around nervously. “Since 2017, Mount Salem has not seen more than two or three murders while I believe we must have at least 100 … . We allowed too much killing before taking serious action.”

Police Commissioner Antony Anderson noted on Sunday that Norwood has recorded 66 murders since 2019, a high figure when one considers that the community is a mere one square kilometre in size with just 12,000 residents.

Of the 79 murders recorded in St James since the start of the year, Norwood accounts for 15, along with 14 additional shootings.

Despite a small military camp being in the community for more than a year now, several families have fled the area out of safety concerns.

While he, too, wants to see an end to the violence, former Norwood Councillor Anthony ‘Skuka’ Henry believes that ultimately, the social-intervention measures will be key in freeing the community from the clutches of bloodthirsty gangsters.

“We are not only looking at police coming in and putting up barricades. We also want to look at the development aspect of the community. We want the various agencies of the State to come in and see what they can do for the citizens of the community ... . Crime just don’t happen overnight. There is a lot of build-up, a lot of issues that contribute to the development of crime in the area,” said Henry, pointing to training programmes and job opportunities as a good start.

“This is a nice community. We have decent people live here, but we want help in the community with jobs, with training … . These things contribute to crime as well.”