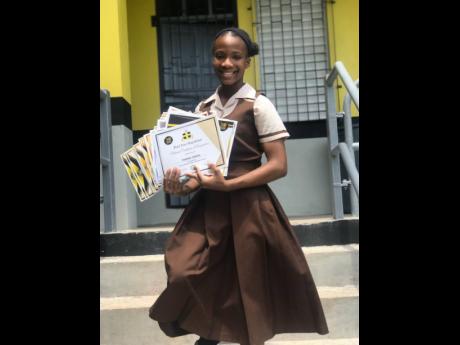 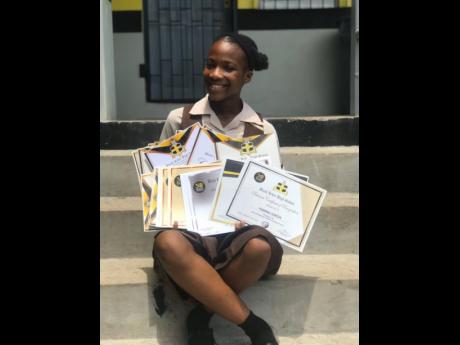 WESTERN BUREAU: Black River High School student Yhannai Ferron has clearly taken academic excellence to another level, as from early days in basic school she has consistently been topping her class. It is, therefore, no surprise that the fifth-form...

Black River High School student Yhannai Ferron has clearly taken academic excellence to another level, as from early days in basic school she has consistently been topping her class. It is, therefore, no surprise that the fifth-form student has already garnered some 60 awards since entering high school.

“I have never come second in any class since I have been to school, throughout basic school, primary school, and high school. It gets really challenging sometimes, but I know what I want, so I know what I have to do in order to get there,” 16-year-old Yhannai told The Gleaner.

“Regarding my study habits, I like doing past paper questions for each grade, so I would use old test papers to study. Over the years I would ask my teachers for test papers, and I would use them and the Internet a lot, and I would watch YouTube videos and do online quizzes,” added Yhannai.

The gifted student, who lives with her mother and two of her four sisters at Happy Grove in Newmarket, St Elizabeth, stated that the awards she has won since she started attending Black River High School in 2017, includes the prestigious Chairman’s Award for her academic excellence when she was in grade nine.

“I have gotten subject awards for each subject,” said Yhannai, in listing some of the 60 awards she has won, which also includes a Vice-Principal’s Award.

“Last year, which would have been for grade nine, I got the Chairman’s Award and 13 subject awards, as well as community service awards. I feel good about it because I am probably the only student to have gotten that many awards at that school in years,” said the obviously delighted student.

Besides her academic exploits, Yhannai has also been active in extracurricular activities, including years-long participation in netball before the outbreak of the COVID-19 pandemic.

“I was a part of the performing arts club up to grade nine, and the debating club, which I joined in grade 10. I also played netball throughout high school, but COVID-19 was the reason why we stopped that,” said Yhannai.

Yhannai’s mother, Caraleene Stevens, said that her daughter’s excellence at school follows that of her oldest sister Demeica Ferron, a past student of Black River High, who received the Prime Minister’s Award and distinction in 10 subjects during her time there.

“We have a foundation that my first daughter Demeica has had from the age of 13, so that has moulded us to be confident. They are mission-driven and purpose-driven,” explained the proud mother. “Yhannai is a top performer and she has never come second in any class from her primary school days.”

According to the mother, in 2018, Demeica was featured on TVJ after she won several awards. She said Yhannai is determined to follow in her sister’s footstep in terms of gaining national recognition.

Yhannai, who plans to pursue a career in business or the sciences when she completes her sixth-form studies and graduate from Black River High, admitted to sometimes feeling overwhelmed by the level of excellence she has managed to maintain over the years. However, she nonetheless holds a sense of pride in her accomplishments.

“Looking at it now, the emphasis placed on excellence by teachers and other persons does feel overwhelming at times. But I feel really great, because sometimes when you think you have not worked hard enough and you will not be getting this reward, you actually get it,” said Yhannai.