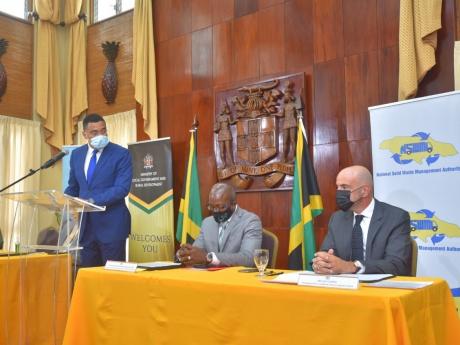 The Government has signed a Memorandum of Understanding with Caribbean Cement Company Limited for the entity to use end-of-life pneumatic tyres in the cement production process.

Under the arrangement, Caribbean Cement will convert used tyres at the landfills into an alternative source of fuel, thereby reducing costs and making a positive impact on the environment.

Prime Minister Andrew Holness, who addressed the virtual signing ceremony held on Tuesday at Jamaica House, said that the agreement will provide a solution to the indiscriminate disposal of used tyres and the stockpiling of the material at the landfills.

He said it is estimated that more than two million used tyres are generated in Jamaica per annum and landfills receive approximately 185,700 tyres per year.

“Most of these tyres are indiscriminately disposed of along roadways, in gullies, stockpiled in open lots and, of course, stored in our landfills, and we estimate that we have approximately two million tyres stockpiled at Riverton City,” Holness said.

“Their very presence creates a myriad of environmental hazards, public health risks, along with other challenges. Further to that, they occupy valuable space when hoarded at landfills,” he added.

Holness further pointed out that tyres are not biodegradable, so leaving them in a stockpile is not a solution.

He commended Caribbean Cement on the innovation in transforming the used tyres into a fuel source.

He said that the production of cement is a highly intensive, energy-consuming activity, with statistics from the Cement Sustainable Initiative 2002, indicating that it takes approximately 60 to 130 kilogrammes of fuel oil and 110 kilowatt hours of electricity to produce one tonne of cement.

“As such, it is important that the cement industry identifies ways in which it can substitute fossil fuel for sustainable, alternative energy sources. End-of-life tyres are ideal for use as an alternative fuel in cement production,” he noted.

Holness said that the signing “symbolises a change in perception from waste as a problem, to waste as a resource. The problems that we need to overcome and the opportunities that we must grasp are interwoven; they are not separate things. The lesson that we should learn is that whatever presents a problem, if you search hard enough, if you approach it from an innovative perspective, you can actually find an opportunity”.

Caribbean Cement's Managing Director Yago Castro, for his part, said that the signing ceremony symbolises the continuation of a longstanding partnership between the company and the Government.

“It represents an extension of our purpose of being responsible corporate citizens and will result in positive environmental and social impacts,” he noted.