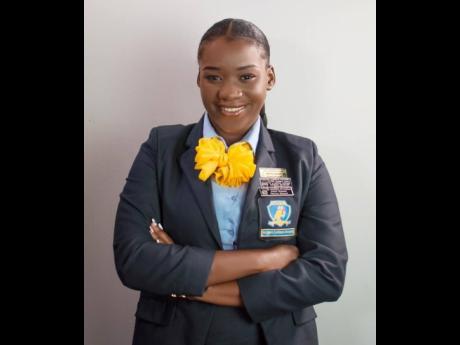 Out of 5,126 candidates across the world, Northern Caribbean University (NCU) student Patrina Stewart emerged as one of the thousand youth delegates chosen to attend the Arab Youth International Model United Nations conference.

Stewart will represent Jamaica at the conference to be held from September 17-20 in Dubai, where youth will discuss current global issues, including the pandemic, and explore how to make the world a better place.

“It is indeed an honour to be chosen. I’m really looking forward to it, especially because I will be graduating school in a few weeks,” she said.

Stewart has studied criminal justice, with an emphasis in social work at the NCU. She is presently working on an internship as she prepares to complete her Bachelor of Science degree.

The final-year student became involved in the forum because of her long-time interest in social reform. “I’ve always been one who wanted to participate in conversations as it relates to social issues … and to be a part of a group of people who have a common motive to change the world one step at a time, or even one life at a time,” Stewart revealed.

For this reason, she had been following the United Nations on social media. Then one day she saw an advertisement inviting youth to apply for the Arab Youth International Model conference.

“It wasn’t a tedious process, it wasn’t an interview; it was just filling out a form, and that was it,” she recounted. A few days later, the UN contacted her with the good news of her selection.

“It’s going to be a good experience for me. I’m going to garner a lot of knowledge, and I also think it’s an awesome opportunity for networking, [with] 195 countries [represented],” said an enthusiastic Stewart.

While she anticipates the conference, Stewart will begin training once her internship is complete. She commended the support of the Student Services Division at the NCU in connecting her with representatives of the United Nations Development Programme office in Jamaica, who will be coaching her on Dubai’s views on certain social issues.

Stewart also demonstrated her passion for reform during her final-year tenure as an administrative assistant for the United Student Movement (USM), a student government body at the NCU.

“It has definitely been one of the defining experiences of my university journey,” she said. “If there is anything that would have moulded me and would have positioned me for the world of work, then it would definitely be my position as administrative assistant of the USM.”

The role gave Stewart a unique vantage point of seeing first-hand the operations of university administration, along with the issues faced by students. She had some counsel as well for future university students contemplating a criminal justice major.

“Know what you want to do with your degree … because it’s not a degree that is geared towards any particular profession, so I have a five-year goal,” she emphasised. “It’s a good programme when you know exactly what you want.”

Stewart is keeping an open mind for life after graduation, the Arab Youth International Model United Nations conference and beyond. “I’m open to whatever opportunities come along that I believe could be an opportunity for growth, for self-development and, of course, for just helping and being of service to my fellow humans,” said Stewart.