Bail extended for Patrick Roberts, to return to court in September 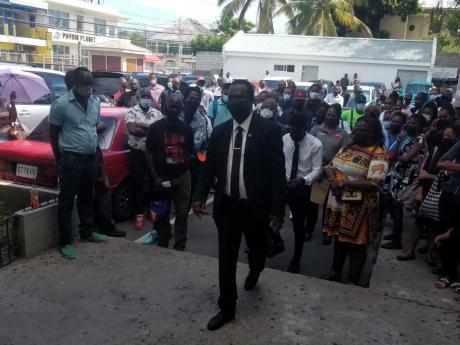 Patrick Roberts had his bail extended and is to re-appear in the Kingston and St Andrew Parish Court on September 28.

Well-known producer, businessman, and councillor, Patrick Roberts, who has been slapped with fraud charges, was today ordered to re-appear in the Kingston and St Andrew Parish Court on September 28.

Roberts and his co-accused, 28-year-old labourer, Ramone Edwards, both had their bail extended when they appeared in court this morning.

Roberts, the local government representative in the Molynes Gardens division and the chief executive officer at Shocking Vibe Production, was charged in May with forgery, uttering forged documents, and conspiracy to defraud after he was questioned by police investigators. While Edwards is facing a conspiracy to defraud charge.

Parish Judge Lori-Ann Cole-Montaque attached conditions to their station bail following a request from the prosecution.

Roberts and Edwards were ordered to surrender their travel documents and to not have any contact with the Crown's witnesses.

Edwards was also ordered to report on Wednesdays at the Duhaney Park Police Station.

Allegations brought against the two are that the complainant's father's signature was forged on a will on April 19, 2019.

It is further alleged that the forgery was witnessed by the two accused.

Roberts is being represented Attorney-at-law Peter Champagnie, QC, while Edwards is represented by Patrick Peterkin.