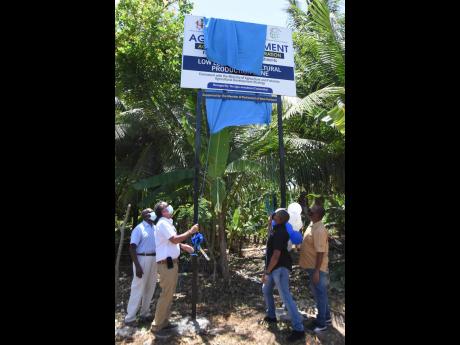 Kenyon Hemans/Photographer
Member of Parliament for West Portland Daryl Vaz (second right) and Minister of Agriculture and Fisheries Floyd Green unveil the sign to mark the Low Layton Agricultural Production Zone in Lennox, Portland. At left is Dr Al Powell, head of AIC, and at right is Peter Thompson, CEO of RADA.

Ten Portland farmers were handed lease agreements for lands located at Lennox in Portland on Wednesday during the official opening ceremony of the production zones by the Ministry of Agriculture.

The production zones were established through a joint initiative between the Ministry of Agriculture and the Agro-Investment Corporation (AIC) to provide farmers with lands to grow their produce and make their ventures more marketable, profitable, and sustainable.

Agriculture and Fisheries Minister Floyd Green said that the Low Layton Agricultural Production Zone at Lennox is testimony to the ministry’s commitment to recover lands for farmers and revitalise the industry throughout the parish.

“Already, we have been able to get back from the National Land Agency (NLA) 9,000 acres of land that was previously under the NLA, which was good agriculture land, but nothing was happening to it,” said Green, who added that more work was needed to tackle praedial larceny.

He pointed out that a new motor vehicle is available in each of the divisions to ensure that officers can move around and that the goal was to have a unit in each police division.

He also pitched an idea for establishing agriculture wardens, adding that Lennox would be a good area for a pilot programme.

“What we want to do is to get people who are on the ground, just like the district constables, but they are tasked with protecting agriculture produce, but they have the powers of our police officers

“Portland, in general, is a very critical part of our drive to increase production in Jamaica. Portland is blessed with wonderful soil, significant arable land, and part of what we want to ensure is that we are organising in a way to enhance the production capacity of the parish,” Green said. “We are here with the Agro-Investment Corporation to unveil our new agro production zones in West Portland. We have to transform agriculture from a disorganised, try-a-thing structure to a market-driven, well-organised structure.

The AIC is tasked with working with the farmers to develop business-planning services, to access grant funding for farmers, to support market linkages, and to ensure that extension services are provided to enhance productivity with assistance from the Rural Agricultural Development Authority, as well as to also ensure that farmers are certified to the highest standard.

For his part, West Portland Member of Parliament Daryl Vaz spoke about the need to provide idle lands to small farmers who continue to produce large volumes of crops in limited spaces but who have shown resilience despite many adversities.

“Today, I am happy that these farmers are benefiting under a lease arrangement to continue and upgrade their livelihood,” said Vaz.