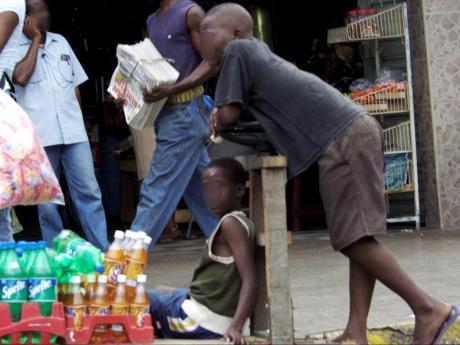 A recent study on children living and working on the streets has found that parental neglect, as well as poor perceptions of parental responsibility push youngsters on the road.

Intergenerational inequalities, chronic child poverty, faulty procedures in the education system such as hasty expulsions, fractured families, and inadequate financial and other forms of support for single-parent households, were among the other push factors cited.

The Child Protection and Family Services Agency (CPFSA), in its Study of Children Living and Working on the Streets in Jamaica report, which was tabled in parliament on Tuesday, outlined that the study was conducted across nine parishes - Kingston, St Andrew, St Catherine, Clarendon, Westmoreland, St James, St Ann, St Mary, and St Thomas.

The aim was to determine the factors that predispose children to be living and working on the streets and to identify gaps in the provision of care and social protection services that impede an effective response to addressing street children.

Some 413 questionnaires were administered, of which 373 were fully completed and analysed.

Of the 373 respondents, 230 or 63 percent were males. Thirty percent of children on the streets fall within the 12 to 13 age group.

The majority of respondents were located in the Corporate Area, followed by St Catherine and St Ann.

Children's advocate, Diahann Gordon-Harrison, said she was not surprised by the findings as it has been a dated reality in Jamaica for a number of years.

“It underscores a care and protection issue, as dealt with by the Child Care and Protection Act which says that where a child is in a vulnerable situation, such as a child who lives on the street or who works on the street, then the agency with responsibility for providing care and protection needs to be actively looking into their home situation, seeing if there are parental issues that need to be addressed so that the care can be provided,” she explained.

“Significantly, the majority of children in the sample, 72%, attended school most days; 18% attended sometimes; 9.4% used to attend but no longer do, while the remainder, less than 1%, never attended school,” a section of the report read.

The children's advocate said their presence on the streets boils down to poverty and the need for financial support. She said the findings indicate a desire to be enrolled in school and to be accessing education, but because of financial realities, they are drafted into the income-earning streams of the family.

Only a quarter of respondents are on the streets both day and night.

Among the respondents, 102 hustle, work or beg every day, another 46 children do so four days per week, while 54 hustle on three days.

“The common daytime activities include selling snacks, ground provisions, and newspapers. Over one quarter of the sample wipe car glass and wash cars while 12% of respondents stated that they hustled in nightclubs and at parties,” the report said.