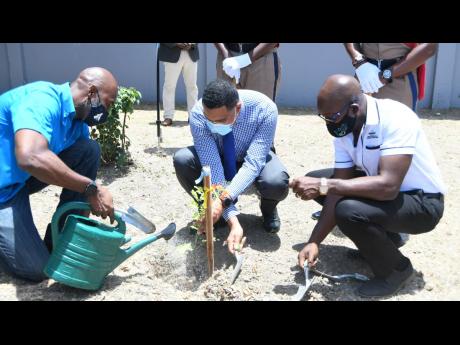 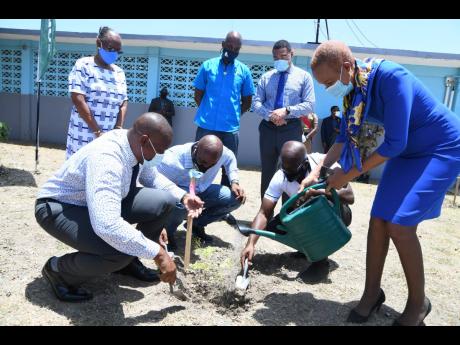 “I think that we have enough space for about 240 trees. We may have to visit again,” Holness quipped as he participated in a tree-planting exercise at his old stamping ground.

Meanwhile, he endorsed the Forestry Department for its continued drive to achieve the objective of planting three million trees in three years as part of the My Tree Legacy, which was launched in April 2019.

“I am very proud to see that the effort is getting some momentum, so much so that it has reached my former school, of which I have fond memories,” Holness said.

The prime minister said that even working briefly in his garden at home conveyed to him clearly that the planting of trees was maintaining the natural environment.

Citing that Jamaica has about 3,370 hectares of forest cover, he said his ministry plans to introduce climate resilience within school curricula to promote sustainable development.

During an interview with The Gleaner prior to the function, Charles said that the tree-planting programme is critical to the fight against climate change and global warming.

“The planting of a tree is equivalent to the preservation of life and environment. The efforts of the Forestry Department must be commended, as we (Jamaica) have been affected by deforestation and other such practices. Therefore, I fully endorse the initiative,” Charles said.

“It is said that a single tree can help to generate human carbon, so we need to appreciate the planting of trees, so we await the others, as the PM suggested,” Campbell said to laughter.

Meanwhile, principal director of forest operations at the Forestry Department, Jerome Smith, said that the entity takes its mandate seriously and has forged partnerships.

Smith believes that the target of three million trees is feasible, noting the commitments of organisations such as Noranda (200,000), the Private Sector Organisation of Jamaica (500,000), and Food For The Poor (100,000). Two citizens have also pledged 300,000 trees. The Forestry Department itself has planted more than 600,000 trees.

Pride of Barbados trees, which grow quickly, were planted at St Catherine High.