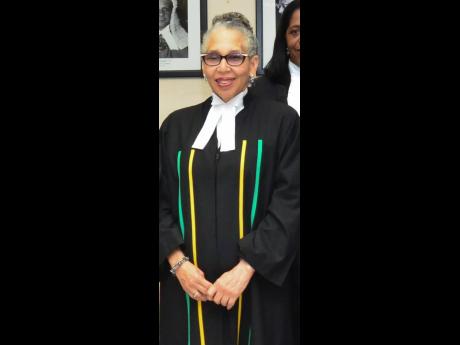 Jamaica has not yet made a decision as to whether the Caribbean Court of Justice (CCJ) will be its final appellate court, and recently retired Court of Appeal Judge Hilary Phillips is expressing concerns about the matter.

One of the things she would have liked to have seen during her tenure “is a very meaningful worthwhile debate on why the CCJ, having been in existence for more than a decade and Jamaica being a signatory to the treaty establishing the court, is not being considered as our final appellate court”.

She emphasised that the CCJ, which was established in 2005, has very erudite persons sitting on the benches of the court and are doing very good work. The CCJ, she says, has published a book in 2016 titled the Caribbean Court of Justice: The First Ten Years, demonstrating that the court has been producing an excellent body of judicial work.

Criticisms have been levelled at the judiciary and the justice system, particularly with regard to the overall delay experienced by litigants and members of the public.

She pointed out that the judges would wish for there to be a high standard of timely delivery of justice for all and to eliminate the backlogs in the courts.

Judges are endeavouring to ensure that matters which come into the system are completed up to the appellate process within a reasonable time, she said.

Justice Phillips said there have been improvements in the justice system during her tenure, which was from 2009 to last month. She said, for instance, when she became an appellate judge, having been in private practice since 1974, there were seven judges and two judicial clerks. There are now 13 judges and one judicial clerk for each judge, so that is clearly an improvement. The judicial clerks are of great assistance as they do excellent research and give support in the production of judgments, she pointed out.

“There is a heavy workload at the Court of Appeal, and having 13 judges is clearly a move in the right direction,” she emphasised. Justice Phillips praised retired president Justice Dennis Morrison for being an excellent administrator, and added that his successor, Justice Patrick Brooks, was proving to be the same as he, too, has his eye on how to improve the efficiency of the court.

She said the future looks bright, noting that the appellate court is working with a cadre of young, very bright judges who are hard-working.

She explained that in the earlier days judges had to sit every day and so had little time out of court to write judgments.

However, with the increase from seven to 10 and more recently to 13 judges, the court schedule can facilitate more time out of court to write judgments, which is an improvement in the process and helps in efficiency, she said.

“Judges are not involved in judicial activism but are focused in working diligently to develop our local and regional jurisprudence. We certainly have the judges who have the minds, the energy and the ability to do it,” she added.