Clarendonian returns home to farm after 50 years in Canada 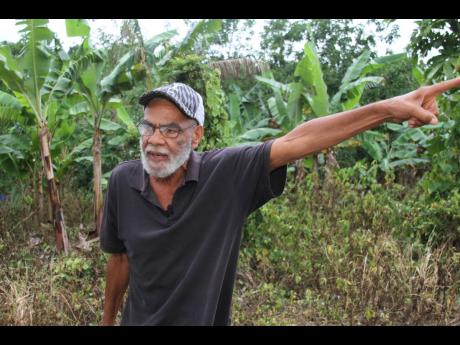 Nathaniel Stewart/Photographer
Farmer Loveant Cardiff Williams points to a section of his farm. 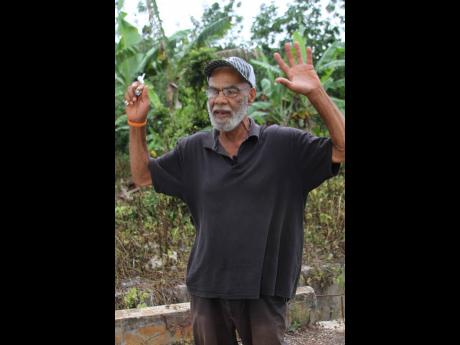 Loveant Cardiff Williams left Jamaica when he was 18 years old to make a new life in Canada. After 50 years – 48 of those married to the love of his life, Evon, and two daughters later – he has decided it is time to pack up and return to his homeland to farm.

Hailing from Whitney in Mocho, a community on the border of Manchester, he said he returned home against the wishes of his family, as he could not stay away from Jamaica.

“I always want to come back cause a yah mi born, one place name Mount Lebanus inna di bush, mi fada call it cow top,” he shared with The Gleaner.

Williams shared that it was a “big fight” to come home as his children, grandchildren and wife were all rooting for him to remain in Canada.

But now, battling with frostbite on one of his toes, he said he knew it was time to run from the cold and return to the land of sunshine.

“Mi decide sey mi a tun ‘bad man’ and come out (to Jamaica), a pure slippers mi a wear from October; mi nah go back. She (wife) just gone up last week, she come dung and get stuck wid mi. She sey she nah live inna di bush, ‘cause she nuh have nuh neighbour,” Williams related.

For Williams, there is no obstacle that could prevent him from working the 38 acres of family land and ‘building a cabin’ to live, as he prepared to do all it takes to settle in the community.

Unofficially farming for over 25 years, he said that on his visits to Jamaica he would cultivate the land, planting bananas and plantains, among other crops.

After returning home last October, he was all smiles as he shared with The Gleaner that for the first time in 30 years, he could say he earned from his efforts.

“Every time mi come mi spend a bag a money and then gone again. After all this time of planting, [it’s the] first mi meck a money. Mi sell 42 dozen pears,” he shared.

In Canada, Williams was his own boss - he ran a lithographic operation, where he employed 19 persons.

Now, he plans to make a success of the farming he is undertaking. Reaffirming his love of the profession, he said his father was born into it and passed down that love to him.

His responsibilities as a husband and a father kept him in Canada even as he fought his desire to return home. Now, with his children all grown - his youngest daughter being 43 years old - Williams said he sees nothing that could keep him in Canada.

Now that he is home, he described his emotions as simply ‘feeling homely’.

And even if he had to go back to one transistor radio, which his father got to listen to the 1964 Mohammed Ali versus Sonny Liston, he would still be contented.

And, if anyone happens to stop in the community to seek him out, he warns not to ask for him by his birth name, as no one would know who he is. ”My name is ‘Tun Tun’, nobody in the community don’t know me by my right name.”