Social investment could come much earlier for Norwood residents under ZOSO 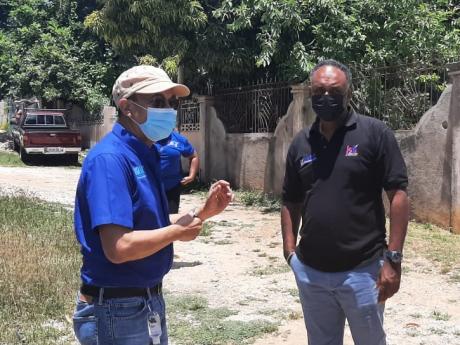 Minister of National Security and the Member of Parliament for St James Northwest, Dr Horace Chang, and Omar Sweeney, deputy chairman of the Zone of Special Operations (ZOSO) Social Intervention Committee, during a tour of Norwood in the parish on June 26, 2021. The area is under a ZOSO - Albert Ferguson photo.

Social investments in Norwood, St James, Jamaica's largest Zone of Special Operations (ZOSO) yet, could come much earlier than they did in Mount Salem four years ago.

According to Omar Sweeney, deputy chairman of the ZOSO Social Intervention Committee, the existing infrastructure layout in Norwood lends itself to development that will appeal to youths in the community, beginning with the regularising of water supply.

He also cautioned against any unrealistic expectations by residents, warning that there will be no activity until safety is guaranteed.

“We also will need some time to engage community leaders,” Sweeney told The Gleaner following a tour of the area on Saturday.

“There are a number of groups to my understanding that are working well in the community and so we have to have the time to meet with them, coordinate and see what plans they were working on, and ensure that we can enrich those plans and make them achievable to their desired objectives.”

He also advised that the HEART/ NSTA Trust, the country's chief training agency, will be playing a big role as well as the Ministry of Education and its affiliates to provide community resources.

Meanwhile, Dr Horace Chang, the Minister of National Security and the Member of Parliament for St James Northwest, in which Norwood is located, also revealed that efforts will be made to formalise electricity in the area.

The ZOSO Social Intervention Committee will meet on July 1 to discuss plans for the community, Sweeney revealed.